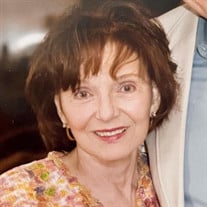 Elizabeth M. "Bette" Simonson,90, died March 7, 2022, in Fargo, North Dakota. Bette was born to Grant and Nora Sundet on September 8, 1931, near Hickson, North Dakota. She attended school in Moorhead, Minnesota, and later moved to Breckenridge, Minnesota, where she was a third-grade teacher. In 1954 she married John Simonson. They made their home in Grand Forks. In 1987, Bette moved to Fargo, where she resided until her death. Bette is survived by her children, Suzanne Simonson, Scott (Allyson) Simonson, Arch (Mary) Simonson, and Steve (Lisa) Simonson, eight grandchildren, and four great-grandchildren. She is preceded in death by her parents, brothers, Royal and Kenneth Sundet, and sister Gloria Fraase. Bette was the last living grandchild of the original Sundet family homesteaders from Norway. Memorials are preferred to Hospice of the Red River Valley. Funeral Service will be held Monday, March 14, 2022, at 11:00 AM, at St. Paul's Episcopal Church, Grand Forks, North Dakota, with a visitation one hour prior to the service. Burial at North Pleasant Cemetery, Hickson, North Dakota, at a later date.

The family of Elizabeth "Bette" M Simonson created this Life Tributes page to make it easy to share your memories.

Send flowers to the Simonson family.