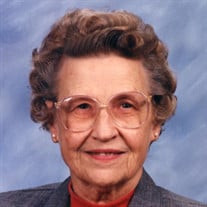 Eleonore "Ellie" Radtke was born October 25, 1919 to Herman H. F. and Louise C. (Langemeier) Nieman in Perham, MN. She was their 13th child (nine survived early childhood) and was born at home on the farm during a major snowstorm. Ellie was baptized and confirmed in St. Paul’s Lutheran Church in Perham. Mr. Herbert Brase was her teacher through all 8 grades in the parochial school. While she attended Perham High School, she worked part time at the Perham Enterprise Bulletin, Young’s Jobbing House, and the Pine Lakes Hatchery. The fall after her high school graduation (1937) she attended Dakota Business College in Fargo. Ellie worked one year at Service System Inc., then proceeded to Western States Life Insurance as Assistant Treasurer (at age 19) and worked there for seven years until her marriage. In 1957, she accepted the position of Assistant Treasurer at Fargo Insurance Agency, Inc. from which she retired in 1982 after 25 years. She was a charter member of the National Association of Accountants, a ND District Treasurer of Walther League, editor of “Message From Home” (a monthly edition for our servicemen during World War II), charter member of Immanuel Lutheran Church, Fargo. She was also a church secretary, Sunday School teacher, choir member, member of the Esther Bible Study Group, member of the Student Christian Welfare Circle, and a charter member of the Lutheran Women’s Missionary League. On July 29, 1945, Ellie married 1st Lt. George A. Radtke in Grace Lutheran Church, Fargo. They made Fargo their primary home except for 10 winters in Arizona after they retired. They were privileged and grateful to celebrate their 66th anniversary in July of 2011. Her George died May 25, 2012. Ellie is survived by her daughter, June Lovejoy, Tempe, AZ, and her two sons, Danell (Dan) Radtke, Detroit Lakes, MN, and David (Dave/Dax) Radtke, Homer, AK., five grandchildren, and nine great-grandchildren. She is also survived by one sister-in-law, Margaret Nieman, Inver Grove Heights, MN and a host of nieces, nephews, and grand & great grand nieces and nephews. A couple weeks before her passing, she celebrated her 100th birthday at Essentia Health-Oak Crossing in Detroit Lakes, MN, where she had been a resident since January 2018. She also had another very special birthday party at her granddaughter and grandson’s home on Lake Sallie (Lauren & Steve Zima). This was formerly the site of her family lake cottage for 45 years. There she was surrounded all afternoon by her kids, grandkids, and great grandkid showering her with hugs and kisses. Ellie passed away early Sunday morning, November 10, at Essentia Health – Oak Crossing, Detroit Lakes, MN. In lieu of flowers, the family requests your memorials go to Hospice of the Red River Valley.

Eleonore "Ellie" Radtke was born October 25, 1919 to Herman H. F. and Louise C. (Langemeier) Nieman in Perham, MN. She was their 13th child (nine survived early childhood) and was born at home on the farm during a major snowstorm. Ellie was... View Obituary & Service Information

The family of Eleonore "Ellie" Radtke created this Life Tributes page to make it easy to share your memories.

Send flowers to the Radtke family.