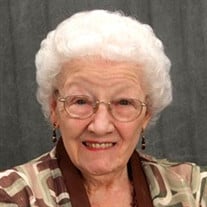 Elaine Bernice Grimm, 97, formerly of Fargo, died on February 23 at Eventide in Moorhead, MN. Elaine was born on July 25, 1922, in Washburn, ND, the daughter of Daniel and Frieda Schulz. After graduating from high school there, she worked in various offices in the McClean County court house, then for the Selective Service in McClean, Logan, and Stark counties, and later for the Coca Cola Bottling Company in Dickinson and the Unemployment Compensation office in the State Capitol in Bismarck. In 1948 she married Wayne Grimm, an attorney, moved to Fargo, and became a full-time homemaker. They had 4 sons. They were charter members of Faith United Methodist Church and Elaine served in many areas of church growth, including teaching Sunday School in its first church building. She was active in the YWCA, PTA, Cub Scouts, and Scout Troop 214. She loved doing puzzles, playing cards, and doing all kinds of handwork. She crocheted afghans for each of her children, grandchildren, and great grandchildren. She also crocheted countless lap robes which she gave to shelters for women and children, day care centers, and homes for the elderly. She made over 500 stocking caps for the homeless and, in her spare time, she embroidered countless dishtowels for family and friends. Everyone cherishes her handiwork. She and her husband wintered in Sun City, AZ, for 24 years after his retirement and were affiliate members of the Willowbrook United Methodist Church. She enjoyed 10-pin bowling, golfing, and especially lawn bowling. They traveled extensively both in the United States and abroad. Faith and family were the cornerstones of her life. She leaves 4 sons: Terry (Carol) of Minneapolis, Stanley (Lynn) of Staunton, VA, Roger (Jane) of Fargo, and James (Jocelyn) of Eugene, OR; 5 grandchildren: Erin (Charles) van Winkle of Minneapolis, Jason (Anna) of San Francisco, CA, Andrew (Aisha) of Colorado Springs, Lisa Grimm (Jon) of Cherry Hill, NJ, and Eleanor Hutchens (Steve) of Charlottesville, VA; and 8 great-grandchildren. She also leaves a sister Ellen Patzman of Bismarck. She was preceded in death by her parents, 2 brothers (Owen and Arnold), an infant brother George, and an infant sister Alma. She was also preceded in death by her daughter-in-law Carol Grimm, beloved wife of Roger Grimm.

Elaine Bernice Grimm, 97, formerly of Fargo, died on February 23 at Eventide in Moorhead, MN. Elaine was born on July 25, 1922, in Washburn, ND, the daughter of Daniel and Frieda Schulz. After graduating from high school there, she worked in... View Obituary & Service Information

The family of Elaine Bernice Grimm created this Life Tributes page to make it easy to share your memories.

Send flowers to the Grimm family.