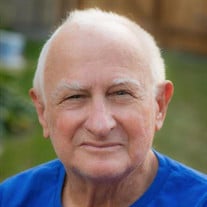 Ed's memorial service will be live-streamed here. https://vimeo.com/627458095 Ed Deibert, 81, Fargo, ND, passed away on Friday, October 8, 2021, at Sanford Medical Center in Fargo. Edward Jerome Deibert entered this world on October 13, 1939 in Bison, SD, born to Joe and Ammertte (Novy) Deibert. Ed graduated from high school in Bison, SD. He went on to further schooling and earned the following degrees: Bachelor of Science in Agriculture from South Dakota State University in 1965; Master of Science from South Dakota State University in 1967; and Doctor of Philosophy from The University of Nebraska in 1976. Ed met Sharon Rymerson in 1965 at SDSU. Ed and Sharon were married on June 26, 1966 in Brookings, SD. They had 55 years together. After Ed graduated from SDSU he worked at Kansas State University as a researcher for three years. Ed was recruited to study for his Doctorate in Nebraska and they spent five years in Lincoln. While in Lincoln, their only son, Josh, was born. In 1976, the family moved to Fargo where Ed began his career as a Professor of Soil Science at NDSU. He taught at NDSU for 29 years. Ed loved sports. He played basketball and baseball when he was younger and even spent some time bull riding. Ed passed on his love of sports to Josh and coached him during his youth. He and Sharon enjoyed watching Kansas basketball, Nebraska football, NDSU football and Minnesota Twins baseball together. In more recent years, you would find Ed at every hockey, baseball and soccer game that his grandkids were playing. If it was in town, he was there. Ed taught his grandkids how to garden and play checkers and chess. Ed is survived by his wife, Sharon Deibert; son, Josh (Carla) Deibert; grandchildren, Lincoln, Dominic, and Jasmine; siblings, Gerald (MaryAnne) Deibert, Theresa (Clarence) Longcor, Thomas (Nancy) Deibert, Greg (Kathy) Deibert, Roy (Mary) Deibert, Ammertte (Dennis Palczewski) Deibert, Rod (Lynelle) Deibert; and many nieces and nephews. He was preceded in death by his parents, Joe and Ammertte; and sisters, Joanne Iverson, and Virginia Orr.

The family of Edward "Ed" Deibert created this Life Tributes page to make it easy to share your memories.

Send flowers to the Deibert family.