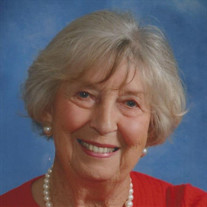 Edith Arneson Dawson died peacefully at Eventide Living Center in Fargo on the morning of August 15, 2019. Edith Louise was born to Alvin and Irene (Bjornstad) Arneson on November 11, 1927 in Sanish, a small North Dakota town which is now under Lake Sakakawea. She was the oldest of seven children. The Arneson family moved to Fargo and made their home near the edge of town on 10th Street at 14th Avenue South where Edith attended Clara Barton Elementary school, the same school where her children and eight grandchildren would attend. While in elementary school, they moved to a farm near Sabin, Minnesota and later to Moorhead where Edith would graduate from Moorhead High. Edith attended North Dakota Agricultural College (now NDSU). While at NDSU, Edith met Bob Dawson at a meet-and-greet shoe dance where the women would place a shoe in the middle of the dance floor. The men would select a shoe, not knowing who their dance partner would be. Edith joked that Bob was the last to choose and got her shoe because no one else would select her shoe as it was the largest. On June 29, 1948, Edith and Bob were married at First Presbyterian Church in Fargo. They were married for nearly 60 years until Bob’s death in 2007. Edith graduated from NDSU with a BA in Home Economics which served her well in what would be her life long profession - homemaker for Bob and their children. She loved to sew and was a wonderful cook. Outside of home, Edith devoted her time to many community groups including Junior League, PTA, and church where she served as president of Presbyterian Women, served as a Deacon and was a member of Session. Edith and Bob enjoyed traveling including taking many trips with friends and family. She and her sisters made an annual trek to Wisconsin visiting their Norwegian relatives. Edith and Bob enjoyed summers at their Pelican Lake home and winters in Ft. Myers, Florida. They relished their regular visits to Whidbey Island, Washington, to visit their daughter where Edith developed many lifelong friendships. Prior to her brief stay at Eventide, Edith made her home at Touchmark in Fargo where she was a charter member of the five o’clock wine group and a member of the Touchmark Choir. Edith was an ardent fan of music and the arts and rarely missed an F-M Symphony performance. She loved reading, sewing, water aerobics and entertaining - but to Edith, time spent with her family including her new crop of great-grandchildren, was the most precious of all. She was preceded in death by her parents, her husband, her sisters, Bimi Lunde, Barbara Bielfeldt and Gini Pryne, one brother, Buzz Arneson, her sons, Chuck and Gary, and her grandson, Jacob. She is survived by: children, Kathy Dawson Fox, Whidbey Island, WA, Tom (Georgia), Fargo and Steve (Vicki), Fargo; ten grandsons, Nathan Hambley (Katie), Seattle, WA; Stuart Hambley (Cori Smith), Lakewood, WA; Zack (Kelly); Alex (Raime Lavelle); Mike (Brittany); Charlie (Brynna Johnson); Matt (Amanda); Joey (Leslie); Ben and Nick, all Fargo, and nine adorable great-grandchildren with two more expected soon; brothers, Jack Arneson (Sue), Moorhead and Jim (Pat), Roseberg, Oregon, Buzz’s wife, Lois Arneson (Moorhead) and many nieces and nephews. Memorials preferred to Red River Human Services, YWCA and Trollwood.

Edith Arneson Dawson died peacefully at Eventide Living Center in Fargo on the morning of August 15, 2019. Edith Louise was born to Alvin and Irene (Bjornstad) Arneson on November 11, 1927 in Sanish, a small North Dakota town which is now under... View Obituary & Service Information

The family of Edith Arneson Dawson created this Life Tributes page to make it easy to share your memories.

Send flowers to the Dawson family.