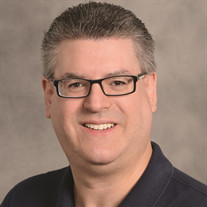 Douglas John Kirk, 55, of Fargo passed away unexpectedly in his sleep at home on January 10, 2020. A memorial service will be held on Friday, January 17, 2020, at 2 PM at the First Congregational United Church of Christ in South Fargo. Visitation... View Obituary & Service Information

The family of Douglas John Kirk created this Life Tributes page to make it easy to share your memories.

Douglas John Kirk, 55, of Fargo passed away unexpectedly in his...

Send flowers to the Kirk family.