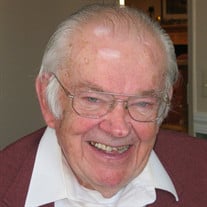 Douglas Herbert Classon of Fargo, ND died on Friday, July 26, 2019, at Rosewood on Broadway surrounded by his family. Doug was born on July 31, 1930, the son of the late Clarence and Thelma Classon. He grew up in Fargo and graduated from Oak Grove Lutheran High School. Doug met the love of his life while working at Northern Drug in Fargo. They were married at Pontoppidan Lutheran Church on June 27, 1952, to this marriage they were blessed with three daughters. When his girls were little he worked at Cereal Tech at NDSU. He would make his daughter’s smile every time he brought home a fresh warm test loaf of bread. After leaving NDSU Doug worked over 25 years as a draftsman which he was very proud of. Once he left his drafting career, he worked for the Fargo Public Schools as a janitor at Ben Franklin Jr. High and Woodrow Wilson. He then temporarily retired until he found his last job at Barnes & Noble which he truly enjoyed. He loved being out where he was able to interact and help people. After his final retirement he loved spending time with his wife, family and beloved dog, Mattie Mae. Doug loved spending summers at Lake Lizzie where his late father-in-law built the family cabin in 1959. He cherished the time there with his daughters and granddaughters; and then had pure joy when his great grandson was able to spend time there as well. The cabin was and continues to be a place of love, laughter and cherished memories. Doug was very proud of the fact that he was an Amateur Ham Radio operator for 70 years. He was very honored to be one of the Ham Radio operators who participated in communication with the Hjemkomst Viking Ship that sailed to Norway. His other pastimes included throwing horseshoes and playing golf; as well as time playing bingo and going to the casino with his wife, family and friends. He had a unique passion for collecting various relics of planes, trains, and stamps. Doug also loved the Black Hills where he traveled many times with his wife, daughters and mother-in-law to visit his wife’s sister and family. Doug’s most cherished memories were with his loved ones as he was truly a family-oriented man. He loved his time with his granddaughters as they grew up. He became “grandpa” to many of their friends. His purest joy was the eleven years he was able to share with his great-grandson, Ben. He was very proud of the fact that his great-grandson’s middle name is Douglas. Doug is survived by his daughters, Julie (Mike) Jacobson, Fargo, ND, Ann Classon, Lake Park, MN, granddaughters, Jamie Vincent, Minneapolis, MN, Jennifer Vincent (Justin Nord), Rothsay, MN, Erica Werner, Fargo, ND; a very special Great-Grandson, Benjamin Douglas Wilson; sister, Donna (Neil) Modin, Bismarck, ND and his nieces and nephews. He was preceded in death by his wife of 66 years, Arlene; daughter, Mary Beth Classon and his parents, Clarence and Thelma Classon. The family would like to thank Rosewood on Broadway for the many years of loving care they provided Doug as well as his late wife Arlene and late daughter Mary Beth.

Douglas Herbert Classon of Fargo, ND died on Friday, July 26, 2019, at Rosewood on Broadway surrounded by his family. Doug was born on July 31, 1930, the son of the late Clarence and Thelma Classon. He grew up in Fargo and graduated from Oak... View Obituary & Service Information

The family of Douglas Herbert Classon created this Life Tributes page to make it easy to share your memories.

Send flowers to the Classon family.