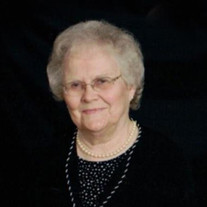 Dorothy's Memorial Service will be livestreamed here: https://vimeo.com/641959858 Dorothy's tribute video can be viewed here. https://www.tributeslides.com/tributes/show/FBFY7H882DQ2MFH7 Dorothy Anna (Bentley) Nelson, 92, formerly of Fargo, ND, died Wednesday, September 23, 2021, at Riverview Landing by Guardian Angels, Otsego, MN. Dorothy was born June 7, 1929, in Haakon County, South Dakota to parents Thomas and Ida (Sandal) Bentley. She was their 7th child and 2nd daughter. Dorothy and her nine siblings grew up on the family farm outside Grandfield, South Dakota. She graduated from Pierre High School in 1945. After graduation, she worked as a secretary to save money for college. Dorothy attended South Dakota State College (now University), earning her bachelor’s degree in Home Economics in 1951. It was at SDSC that she met her husband, Douglas Nelson. They were married June 17, 1951, in Pierre, South Dakota, and made their home in Sioux Falls. Once they had filled their small home with their three children, Cynthia, Jeffrey, and Robert, they relocated to Red Wing, MN for Doug’s work. A few more years brought another relocation to Minnetonka, MN, and a final relocation to Fargo, ND in 1973. Dorothy dedicated her life to children. She worked in schools all along the way, settling into McKinley Elementary once they reached Fargo. Dorothy hung up her bell in 1991. Even while retired, she continued to teach Sunday school at First Lutheran until she was 90. Dorothy did not limit her service to children as she volunteered in her community and church. Over the years she delivered flowers at the hospital, made quilts with her church group, and hosted many meals at First Lutheran, always making sure the silverware was accounted for. In 2019, after 46 years, Dorothy sold her Fargo home and eventually made her way to Otsego, MN, settling close to her son, Jeff, a couple grandchildren, and great-grandchildren. Dorothy passed away peacefully with her daughter Cindy by her side. It was a sunny, cool fall morning, and she had a view of the mist coming off the Mississippi River. Dorothy is survived by her sister, Susie Mae Bentley; her daughter, Cindy (Al) Purdy; her son, Jeff (Colleen) Nelson; five grandchildren: Jennifer (Josh) Schaefgen, Rebecca (Charles) Spessard, Patrick Nelson, Megan Purdy, and Zachary (Anne) Purdy; four great grandchildren: Henry, Thomas, Caroline, and Samuel; as well as nieces and nephews. She was preceded in death by her parents; her husband Doug; her youngest son Bob; five brothers and three sisters. Memorials can be made to FORCE, Facing Our Risk of Cancer Empowered, facingourrisk.org, an organization whose mission is to improve the lives of individuals and families facing hereditary cancer. Checks can be mailed to FORCE: Facing Our Risk of Cancer Empowered, 16057 Tampa Palms Blvd, W, #373 Tampa, FL 33647. Condolences and memories may be shared at www.hansonrunsvold.com Arrangements entrusted to Hanson-Runsvold Funeral Home – Fargo, ND

The family of Dorothy Anna Nelson created this Life Tributes page to make it easy to share your memories.

Send flowers to the Nelson family.