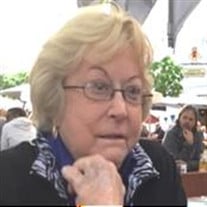 Dorothy Ingibjorg Eckert, most recently of Ottertail Lake, Minnesota, unexpectedly passed away on Thursday, 2 December 2021, in Fargo, North Dakota. Born in Dryden, Ontario (Canada) on 8 May 1937, she grew up in Keewatin, Ontario, graduated from the St. Boniface School of Nursing in Winnipeg, Manitoba in 1958, and worked as a nurse (RN) in Canada and the United States. In respect of her wishes, immediate cremation followed her passing at the Hanson-Runsvold funeral home in Fargo, ND; her remains will be buried with those of her husband at their Ottertail Lake cabin. Dorothy met Robert Laird Eckert in Minneapolis in February 1963; they married on 21 September 1963 and established their home in Wahpeton, North Dakota, where they raised three children, Robert Laird (Jr), Ann Marie, and Joseph Edward. Dorothy was preceded in death by Robert, son Joseph, her parents, and her three brothers; she is survived by her children Bob and Ann Marie. Robert was appointed judge by the governor of North Dakota in 1975 and was re-elected for the position numerous times until his retirement in 1995. Always drawn to water, Dorothy and Robert spent a large part of their lives at Ottertail Lake in Minnesota, but upon Robert’s retirement, they built a house in Point Venture, Texas, based on Dorothy’s requirement that she could see the lake through the house windows when coming up the driveway. Here they enjoyed the warmer winter weather, and Dorothy managed apartment complexes in Texas and North Dakota. After Robert’s death in 1998, Dorothy continued maintaining two residences, in Temple, Texas, and at the family cabin at Ottertail, until her death. Dorothy lived a full life, and enjoyed regaling her grandchildren with stories of her life: family life and growing up in Keewatin; nursing career and friends; working with a famous heart surgeon in California; hitchhiking from Canada to California; driving her sports car (MGA) down Hollywood’s Rodeo drive; flying an airplane; teaching college courses; meeting John Wayne in Zihuatanejo, Mexico; etc. An independent individual, Dorothy had a lifelong interest in learning and traveling. Educated as a nurse, she was a self-taught property manager and successful businesswoman. With repeated trips throughout the US, Canada, and Mexico, she traveled to Antarctica, Hungary, Latvia, Burma, China, Kyrgyzstan, Germany, Spain, Central and South America, and too many other places to count; having traveled to almost every continent she said she’d have to leave Africa and Australia to her grandchildren. Dorothy is survived by her children Bob and Ann Marie, and eight grandchildren – Bob’s children Molly, Robby, and Scotty; Ann Marie’s children Caitlin and Annika, and Joseph’s children Avery, Mary, and Charlie, as well as by countless other family members and friends she loved dearly, and with whom she shared so many special moments. Dorothy’s values and love live on with her children and grandchildren, all of whom wish to say “Thank you” to her wonderful friends and neighbors who shared so much of their time and of themselves. As Dorothy often quoted her mother, Góða nótt, kæra móðir. Rest in peace, mother. As well as her eight beloved grandchildren, Dorothy is survived by two children: Robert L. Eckert (Jr), 1101 Ivean Pearson Rd, B-202, Lago Vista, Texas 78645 (512-731-0094); Ann Marie McBride, 6829 Dean Drive, McLean, VA, 22101 (703-403-2263). She was preceded in death by her husband, son, parents, and her three brothers: Husband: Robert Laird Eckert, 15 December 1932 – 08 November 1998 (age 65); cancer-glioblastoma (brain) Son: Joseph Edward Eckert, 23 May 1969 – 18 September 2018 (age 49) Father: Johannes Wathne Oddson, 07 April 1905 – 1987 (age 87); milo displacia (possibly cancer/leukemia related) Mother: Elinborg Oddfridur Oddson (nee Swanson), 09 October 1905 - 30 November 1996 (age 91) Aunt: Vigdis Jonina Tomkins (nee Swanson), 18 February 1908 – 22 September 1997 (age 89) Brother: John Keith, 30 November 1935 - 27 November 2013 (age 78 – minus 3 days); cancer-urothelial cell carcinoma – prostate/bladder/kidney Brother: Robert William, 07 May 1939 – 15 June 2017 (age 78 and 1 month); cancer-urothelial cell carcinoma - bladder Brother: Johannes Wallace, 27 August 1943 – 07 October 2021 (age 78 and 2 months); cancer-urothelial cell carcinoma – prostate/bladder Additional information on the family and the Keewatin Icelanders can be found at http://www.allanjohnson.ca/keewatin.html

The family of Dorothy Eckert created this Life Tributes page to make it easy to share your memories.

Send flowers to the Eckert family.