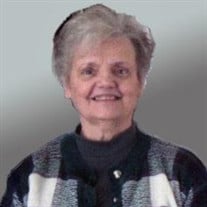 Doris's funeral service will be live streamed here. https://vimeo.com/671287047 Doris Marie Kyllo (Saeland) died on January 19, 2022, while surrounded by her family. Dorrie was born August 25, 1942, in Fargo, ND, to Toralf and Leona (Brackin) Saeland. Dorrie grew up in Fargo, where she attended Fargo Central High School and graduated in 1960. On September 8, 1961, she married Ronald Kyllo and started their family in Fargo. In 1969 they moved to Wahpeton, ND for Ron's job, and in 1973 they moved to Hickson, ND, where Dorrie would live for the next 40 years. In 2013, Dorrie moved to Fargo. Dorrie worked for the phone company in high school and the early years of their marriage. Later, always loving to sew and quilt, Dorrie worked as a seamstress and drapery maker for periods of time and later opened and operated her own drapery business for several years. She was active in the North Dakota Quilters Guild, attended quilting and sewing bees, and always enjoyed outing with her quilting group of friends. Dorrie managed to run her business and continue her sewing and quilting activities even as she selflessly devoted herself to caring for Ron during a serious illness for the last 18 years of his life. Dorrie was preceded in death by her parents, Ted and Leona Saeland of Fargo, her husband, Ronald of Hickson, ND, step-sister, Joyce Brogger of Knoxville, TN, and son-in-law Scott Rogers of Moorhead, MN. She is survived by her three children Kathi Rogers, Moorhead, MN; Wayne Kyllo, West Fargo, ND; and Michael Kyllo (Mary Magnuson) of Maynard, MN; Grandchildren Samantha and Jack Rogers; Sister Clarice; and several nieces and nephews. A truly dedicated wife and mother, Dorrie often turned to her faith for strength in difficult times and rejoiced in her faith during good times. As a mother, as a grandmother, and as a friend, Dorrie will be deeply missed. Dorrie's funeral service will be held Monday, January 31, 2022, at 1:00 pm, with a visitation one hour prior. Burial is to be scheduled for a future date at the Lower Red River Wild Rice Cemetery in Hickson, ND.

The family of Doris "Dorrie" Marie Kyllo created this Life Tributes page to make it easy to share your memories.

Send flowers to the Kyllo family.