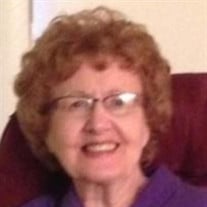 Doris's service can be viewed here: https://vimeo.com/425293843 Doris Jean Christianson passed from this Earth to her heavenly home on May 28, 2020 at age 89 in Fargo, ND. Doris was born September 30th, 1930 on a farm near Osnabrock, ND to Walter and Ada Bowles. She was the third oldest of ten children. Doris moved to Fargo as a young woman and attended the New York Hairdressing Academy. She later met Julian Christianson and they married in 1952. They made their home in Fargo and enjoyed going to the lakes on weekends and spending time with friends. Doris was a stay-at-home wife and mother for years. She always said this was her favorite job. Doris also provided childcare for several children during her time at home. In the 1970s, Doris accepted a job at Knight Printing where she worked for 23 years, retiring at age 70. Julian passed away in 1990 at the age of 68. She then moved to a condo in her retired years. It was there she enjoyed watching Bison football with her special friends, Jean and Jan. Doris also liked Twins baseball, needlepoint, and shopping at Herberger’s. Working with playdoh and puzzles with her great-granddaughters brought her much joy. She loved family celebrations. No one’s birthday passed without her sending a card. Doris is survived by her daughter, Julie Bartholomay of Moorhead, MN; granddaughter Erin (Eric) Schnell of Reile’s Acres, ND; and great-granddaughters “the little girls”, Azalya and Brynlee Schnell. “Gigi” adored her precious great-grandaughters, who were the lights of her life. Doris is also survived by Linda Brown of Oakdale, MN and daughter, Michelle; Sally Bowles of Eden Prairie, MN; brothers, Jerry (Connie) Bowles of Langdon, ND and Ron (Peg) Bowles of Boulder, CO; sisters, Lynetta (Dennis) Karlstad of Dallas, TX, Pamela Breyen of Andover, MN, Susan (Lawrence - her favorite candy supplier) Wild of Fargo, ND, and many nieces and nephews. She was preceded in death by her parent’s, Walter and Ada Bowles; sisters, Muriel (Ray) Schrader and Bette (Frank) Bata; and brothers, James (Eunice) Bowles and Richard Bowles. Doris regularly attended Hope Lutheran Church. Thank you to RRV Hospice for your kindness and support these last several months. A private graveside service will be held in June at Calvary Lutheran Cemetery, Ulen, MN, followed by a large family gathering in the spring. Arrangements entrusted to Hanson-Runsvold Funeral Home, Fargo ND.

The family of Doris Jean Christianson created this Life Tributes page to make it easy to share your memories.

Send flowers to the Christianson family.