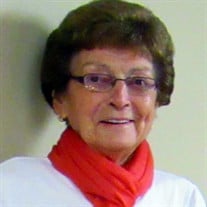 Donna D. Palmer, 87, Fargo, ND passed away March 29 at Bethany on 42nd in Fargo, ND with family by her side. Donna was born on October 29, 1931, near Lidgerwood, ND. She grew up on a farm outside of Lidgerwood and graduated from Wahpeton High School, Wahpeton, ND. Donna met her husband, Thomas Palmer, while he was attending Wahpeton Science School. One day he went into a local café for a piece of pie and returned many times to chat with the waitress who caught his eye. Tom and Donna were married on October 29, 1949, in Wahpeton, ND. They lived on the family farm by Erie, ND, later moving to Jamestown, ND and settling in Devils Lake, ND in October 1968. Mom worked at Gerrells Sporting Goods in Devils Lake for over 20 years. She held various positions including Office Manager. At home, she held the office of “Family Drill Sargent” from 1951 until she retired with honors in 2019. She taught the “Privates” (children, spouses, and grandchildren) serving underneath her very well. Donna belonged to Homemakers and Ladies Aid while living on the farm. She joined the Women’s Circle group at her church while living in Devils Lake. Mom joined Faith Chapter, Order of Eastern Star in Erie, ND in 1950. She affiliated with Lorraine Chapter when she moved to Devils Lake and Mecca Chapter when she moved to Fargo, ND, being a 68-year member at the time of her death. She held various stations at both the local and state levels, serving as Worthy Matron several times in both Faith Chapter and Lorraine Chapter. One of her special memories was being Worthy Matron for the initiation of 2 of her 3 daughters and her daughter-in-law. Donna was also very active in the International Order of Rainbow for Girls serving on both the state and local Advisory Boards. She was very honored to serve as State Mother Advisor for Heather Malone in 1992-1993. Donna was loved by many and was considered MOM by many of her Eastern Star Sisters and Brothers, as well as Rainbow Girls. Being called MOM made her feel so loved. Donna loved gardening and flowers. She had a huge garden while living by the lake. She continued her love of flowers in her retirement. Donna moved to Fargo in 1997 and soon had beautiful flowers all around her home. She even had strangers and neighbors stopping by to thank her for the beauty she brought to the neighborhood. She belonged to Presbyterian Churches in Erie and Devils Lake and joined Atonement Lutheran Church upon moving to Fargo. Besides her Eastern Star activities and gardening, Donna enjoyed attending her grandchildren & great-grandchildren’s events and volunteering at the hospitality desk at Essentia Health and the infant room at Atonement Lutheran Church’s MOPs program. Survivors include her children, Dawana & Gene Jensen, Fargo; Larry & Shelley Palmer, Otsego, MN; Sharon & Greg Eisenzimmer, Munich, ND; and Cheryl & Alan Siirila, West Fargo; her grandchildren including Nichol & Brian Bennes; Chad & Wendy Palmer; Ryan & Maria Eisenzimmer; Darcy & Fred Van Bergen; Matthew & Meagen Jensen; Paul Jensen; Jason & Jessica Palmer; Andrew & Cassy Siirila; Mason Siirila and his boyfriend Chris; Abbie & Jon Skauge and 18 great-grandchildren and 1 great-great-granddaughter. Donna is also survived by her siblings, Ron & Nancy Hobza, Joyce & John Kinder, Gloria Hines, and Ramona Logan; special adopted daughter, Lori & Craig Kantos and her family along with numerous nieces, nephews and cousins. Preceding her in death were her husband, Tom; great-granddaughter, Kennedy Jensen; parents, Mary & Reuben Hobza; father and mother-in-law, Mason & Aleda Palmer; brothers and sisters-in-law, Buck Logan, Ted Hines; Fred & Eleanor Palmer; Cherry & Marvin Kenimer and Beatrice Reese. Special thanks to those that have spent time with or have helped our Mom during her time here with us. Your friendship and love meant so much to her and to us. Memorials are preferred to the American Cancer Society or ND Grand Chapter OES Foundation/ESTARL (Eastern Star Awards for Religious Leadership) Scholarships.

Donna D. Palmer, 87, Fargo, ND passed away March 29 at Bethany on 42nd in Fargo, ND with family by her side. Donna was born on October 29, 1931, near Lidgerwood, ND. She grew up on a farm outside of Lidgerwood and graduated from Wahpeton High... View Obituary & Service Information

The family of Donna Dean Palmer created this Life Tributes page to make it easy to share your memories.

Send flowers to the Palmer family.