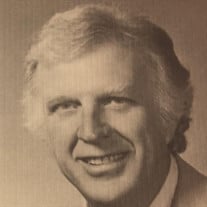 Donn's Memorial Service can be viewed here: https://vimeo.com/469540584 Donn's Video Tribute can be viewed here: https://www.tributeslides.com/tributes/show/9D28P856ZMR6T6HG Donn Colman passed away at the age of 96 on Friday, October 10, at Sanford Hospice House in Fargo. Donn was born in Owatonna, MN, to Everette and Frieda Colman on July 4, 1924. Early in his childhood, the family moved to Fargo, where he attended Agassiz and then on to Fargo Central, where he starred in basketball, winning the state title in 1942, his senior year. With the war breaking out in 1941, he was eager to join the fight. He enlisted in the Navy and soon became a fighter pilot flying the P-51s and Corsairs on aircraft carriers. Serving out the war, he returned to Fargo and began working at the family business Coleman’s Furniture downtown Broadway, now a footprint of Block 9. His love of flying continued, and he flew with the National Guard for a period of time and later owning a plane for business and pleasure. In 1947 he married Mary Hilleboe, and they started a family raising four children. Later in life, he married Beth Pitsenbarger and had one child. He went on to start several businesses. He had a love of golf and cars throughout his life, and he carried a single-digit handicap. He had many convertibles cars as well. Including his favorite, a dark emerald green 1965 Olds 98 convertible. He was active in fastball pitching and was the pitcher of his team. Thursday golf with his Fargo buddies started in the forties and continued into the 2000s. This collection of Fargo pals were known as Fargo’s Rat Pack and played rain or shine and were a sure bet to be seen at the Elks Lodge every Thursday night all through the 1940s to 1990s. They were a tight bunch that had all seen war and remained close until their dying day. He also enjoyed pheasant and duck hunting and shared many hunting trips with his two sons in North Dakota. He was a Fargo guy inside and out and never had a great desire to live anywhere else. He was an “old Fargo” guy in the true sense of the word. If wealth is measured by the number of friends, one has he was a rich man. Every July 4, he would love to say that the entire country was celebrating his birthday by shooting off fireworks. His birthday celebration was always a family event with his sister’s family and many others. He is survived by his daughter Terri Muren (Jim) Stonington, CT, daughter Kathy Colman Colorado Springs, CO, son Craig (LaRae) Detroit Lakes, MN, son Brad (Sadie) Fargo, ND, daughter Ali Albaugh (Josh) West Fargo, ND. Grandchildren Kathy Couch, Todd and Brett Varrone, Christian Colman, Olivia Arth, Ryder, and Gemma Albaugh. Great-grandchildren Lakai and Leo Varrone. He is preceded in death by his parents, sister Kathy Swanston and brother-in-law William (Bill) Swanston. A memorial service will be held, Monday, October 19 at 11:00 AM with a visitation one-hour prior at Hanson-Runsvold Funeral Home. In lieu of flowers, please donate to the Hospice of The Red River Valley.

The family of Donn Clinton Colman created this Life Tributes page to make it easy to share your memories.

Send flowers to the Colman family.