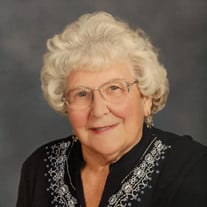 Donata's service will be livestreamed here: https://vimeo.com/655110374 Our mother, Donata Jeannette Nellermoe, 90, flew home to bliss on November 11, 2021. She knew and testified that she was ready to "go home to heaven" to her Savior Jesus Christ shortly before leaving this earthly plain. We are secure in faith that she was joyfully received by her Lord and all those loved ones known and unknown who had gone before. Mom entered this world on August 8, 1931, born to Lawrence and Evelyn Arnhalt. They lived with her grandparents (Arnhalt) and others on a family farm outside of Kent, MN "across the river from Abercrombie." Her parents traveled to Inglewood, CA when Donata was about 2 years old, in a Model-T and $400, to pursue a different life since the Arnhalt family farm could not support another brother and his family long term. Her mother already had 4 brothers who had moved to that area from Abercrombie in pursuit of their futures. Her father worked two jobs to support the family and purchased a small home in Inglewood. Donata became a big sister to her only sibling, John Jacob four years later. Her beloved father was killed in a work accident in his mid-thirties when mom was about 10 yrs old. Shocked and heartbroken they returned to the Johnson family home in Abercrombie, N.D. Donata attended school in Abercrombie and worked in her teen years at the Aber Cafe to help support the family. Her mother took in children (wards of the state) and baked for the cafe. She and our father Ken Nellermoe (Kindred farm boy) met through many athletic competitions in Aber and surrounding communities, she cheering for the home teams. Donata attended Moorhead State University where she attained a B.A. and teaching degree. She taught a couple years in small towns with her first job in Willmar, MN, and had a short stint on the east coast as a salesgirl, dancer, singer extraordinaire, with the Hormel Girls Traveling Caravan. In her twenties she traveled by steamliner to visit Ken in England where he was stationed in the USAF. They became engaged and married on Nov. 3, 1956 at Emmanuel Lutheran Church in Abercrombie. They traveled where the USAF sent them for 20 years. They had 3 children at Webb AFB in Big Spring, Texas where they lived from 1957-1961. She traveled to many places as a military wife, domestically and abroad. They retired the military life to Fargo, ND in 1974 to be near their parents. She was a Concordia C400 and NDSU supporter, especially Bison Football! Donata volunteered throughout her life. She had a heart for service starting as a teen singing at Maddens Resort, Gull Lake, MN in the dining room where her mother worked summers in the kitchen. She has remained faithful to her early Christian schooling in word and deed. She has been a constant fixture in the fabric of every church attended especially at First Lutheran Church in Fargo and summers at Shoreham Chapel on Lake Melissa for the past 47 years. She involved herself in choirs, singing solo's when asked, teaching Sunday school, serving at funerals and women's circles. She was engaged in Global Missions and traveled to many countries to teach or just be a support. Some of these countries were China, Slovakia, Israel, and Africa. She loved to travel and bear witness to God's people. Donata also loved to play bridge, attend music events and was a member of the PEO Sisterhood. All her friends and relatives were near and dear to her heart. Donata, a smart and intelligent woman, was always interested in others. She had an indominable spirit that meant well even though all those who knew her knew she could be a force. The most recent joy in her life was celebrating her 90th birthday after church with parishioners and friends at Shoreham Chapel this summer. She spent her summers mostly at her lake cabin on Lake Melissa and playing bridge Mondays whenever she could make it to the Detroit Lakes Country Club. Due to declining abilities, Donata moved to Alexandria to a care facility to be near her son Mark and his family. Her son Paul had lived with her in Fargo for a year prior to moving so she could remain in her condo in Fargo. Daughter Kristine traveled "home" a couple times a year to beat her nightly in Scrabble, she loved to play despite. She was a good egg. She enjoyed challenging her mind daily competing with the nightly Jeopardy contestants; always wanting to do something that was stimulating her mind. Even though she was not " connected " she loved to see SNAP Chats of her grandchildren but especially her two great-grandchildren, over the past several months while living in Alexandria. She is preceded in death by her parents Lawrence and Evelyn, two step-fathers, Johnny Granholt and Carl Affield, brother John Jacob Arnhalt and her husband of 36 years, Ken Nellermoe. She is survived by her sons Paul Nellermoe of Fargo, ND; Mark (Lauri) Nellermoe of Alexandria, MN; daughter Kristine (Mike) Nellermoe Blankendaal of Tucson, AZ; 3 grandchildren, Michael Nellermoe, Nicole (Brent) Graboski, Kelly (Thomas) Herrera; 2 great grandchildren, Haisley and Beau Graboski; nephew Justin (Tonya) Arnhalt; niece Allyson Arnhalt; many cherished cousins and extended family. A private internment will be held for family in Abercrombie, N.D. A Celebration of Life Memorial will be held for friends and family at First Lutheran Church, Fargo on December 11, 2021 at 2:00 p.m.. In lieu of flowers, memorials are preferred to First Lutheran Church for Global Mission or a charity of your choosing. All other correspondence will be received for the family by Mark Nellermoe, 6752 Sunset Strip NW, Alexandria, MN 56308.

Donata's service will be livestreamed here: https://vimeo.com/655110374 Our mother, Donata Jeannette Nellermoe, 90, flew home to bliss on November 11, 2021. She knew and testified that she was ready to "go home to heaven" to her Savior Jesus... View Obituary & Service Information

The family of Donata Jeannette Nellermoe created this Life Tributes page to make it easy to share your memories.

Send flowers to the Nellermoe family.