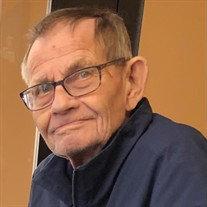 Donald Edward Rudolph, 85, Fargo, ND, passed away Thursday, December 24th, 2020. He was born May 29th, 1935, in Hibbing, MN. He attended Oak Grove Lutheran School, Fargo, ND. He married LaVonne Otterson on May 15th, 1956. Don and LaVonne had four children together. Don served in the U.S Army and spent time in Korea. After the Army, he worked for the U.S. Postal Service and retired in 1992. After retiring, Don and LaVonne enjoyed two winters in Port Aransas, Texas. He went on to become a volunteer at the Villa Maria Nursing Home, Fargo, ND. Don was honored to be awarded Volunteer Of The Year. He was presented with the award by the governor of North Dakota. He enjoyed sports, especially the NDSU Bison, Minnesota Vikings, and Twins. He loved his dogs very much and had many, mostly German Shepherds. Don was preceded in death by his parents, Paul & Iva Rudolph, his sister Donna Tandy, brother Duane Rudolph, daughters Laurie Luptak, ReNae Rudolph, and granddaughter, Karlie Renae Elliott. He is survived by his wife, LaVonne Rudolph, his son, Greg (Jackie) Rudolph, Spokane, WA, his daughter, Jodi (Nathan) Elliott, Fargo, ND, along with many grandchildren & great-grandchildren. There are no funeral plans at this time.

The family of Donald Edward Rudolph created this Life Tributes page to make it easy to share your memories.

Send flowers to the Rudolph family.