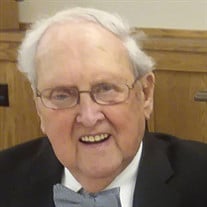 Don's service can be viewed here: https://vimeo.com/451868023 Donald G. Nettum, at 90 years of age, passed away on to his heavenly home on June 26th, 2020, surrounded by his loving family. Don was born July 11, 1929, to Waldemar and Christine (Overboe) Nettum. He was raised in Kindred, North Dakota, and moved to Fargo in 1942. He graduated from Central High School, then joined the Naval Reserve. Later he was drafted into the Army, and after, served with the CIA. Don met Julaine (Peterson) in 1953, and they were married on July 17th, 1954. They were active members of First Lutheran Church and raised all their children here in Fargo. They bought a cabin at Round Lake, Minnesota, and enjoyed many happy times at the lake, and retired there in 1987. Don spent lots of time at his hobby of woodworking and made lots of beautiful things. He is survived by his loving wife, Julaine, and their children, Linda Haider, LuAnn (Dave) Robberstad, Daniel (Sue) Nettum, Christine (Joe) Thorndal, Dalen Nettum, and Dorene (Tony) Hamilton. He also enjoyed twenty-one grandchildren, fifteen great-grandchildren, with two more on the way, along with many nieces and nephews. Don was preceded in death by his parents, sister Ione, and son-in-law Bob Haider. Memorials may be made to First Lutheran Church Helping Hands, Red River Valley Hospice, Roger Maris Cancer Center, or a charity of personal choosing. We wish to thank our many family and friends for their prayers and support at this time of sorrow. Don's tribute video can be viewed and copies ordered here: https://www.tributeslides.com/tributes/show/SRKQ6F635HHQLLMW

The family of Donald G. Nettum created this Life Tributes page to make it easy to share your memories.

Send flowers to the Nettum family.