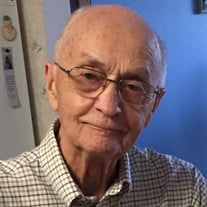 Don’s service will be viewed here: https://vimeo.com/478542043 Donald Johnson, of Fargo, ND (90) died on November 3, 2020 at Bethany on 42nd, Fargo, ND, with his wife, Dorothy, by his side. Don was born in Clearbrook, MN to Tallack and Sylvia (Sorenson) Johnson on March 16, 1930. He graduated from Clearbrook High School in 1948. He served one year in the Army and was called back in when the Korean War started. He served with the 2nd Infantry Division in Korea from December 7th of 1950 to November of 1951. After returning to the United States, he lived in Minneapolis. He married Dorothy Levine in Marquette, MI on August 29, 1953. They moved to Moorhead, MN where he attended Concordia College and then worked in construction with Twin City Construction and United Ventures until 1958. At that time, he started the chain of Don’s Car Washes which grew to include ten plants in Fargo, Moorhead, Minneapolis and Billings. Don and his partner Mel Skarphol sold the car washes in 1987. Don gave his life to Jesus Christ when he was a teenager, but his faith in the Lord really came alive in the 1980s. Don faithfully prayed for countless people – probably including you reading this! His heart prayer was that everyone have the peace and joy he had knowing Jesus as his Savior from sin and the assurance that he is in Heaven now. Don and his family enjoyed their home on Bad Medicine Lake from 1981 until 1996 and their winter home in Peoria, AZ from 1996 until 2010. Don was an avid hunter, fisherman and golfer. Don was a charter member of Hope Lutheran Church where he taught Sunday School and served on the Church Council and as a Stephen’s Minister for several years. He was a faithful member of two Bible Study groups. Don served on boards of the Fargo Union Mission (New Life Center), Eventide, Salvation Army, YMCA and American Bank and Trust in Moorhead. He also served on the board of the International Car Wash Association. Don is survived by his wife Dorothy, daughter Nancy Warwood, Bozeman, MT, son David (Debi), Boise, ID, daughter Marie Grey, St. Cloud, MN and daughter Peggy (Bruce) Stordahl, Fargo, grandson William (Nicole) Warwood, Bozeman, granddaughter, Kristin Johnson, Boise, ID, grandson Jordan (Casey) Warwood, Philadelphia, PA, grandson, Derek Johnson, Milwaukee, WI, great grandsons Kamden and Ashton, great granddaughter, Mackenzie, and another great grandson due in November. He was preceded in death by his parents and siblings Willard Johnson and Arvilla Joncas and Arvilla’s son Scott. In 2005, Don and some family members and friends started a non-profit organization called Wellspring for the World whose goal is digging deep water wells in the arid regions in Africa. The well digging is done by World Vision. At this point the group has raised money for 1000 wells, bringing clean water to over 300,000 people. Memorials to this organization would be appreciated: Wellspring for the World, PO Box 9993, Fargo, ND 58106. Due to COVID-19 Concerns: The memorial service will be held on Saturday, November 7, 2020 at 2:00 p.m. at Hope Lutheran Church South Campus in Fargo, ND. Don’s family has asked that all in attendance wear masks and observe social distancing. The service will be live-streamed on the Hanson-Runsvold website and be viewable online afterward. Please choose what works best for your household and feel no pressure or obligation from the family to attend. We are not hosting a visitation or luncheon.

The family of Donald Johnson created this Life Tributes page to make it easy to share your memories.