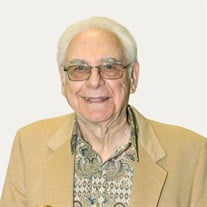 Don's service can be viewed here: https://boxcast.tv/view/don-hanson-funeral-hqnsncbz5wcbpxkn053f Donald's tribute video can be viewed here. https://www.tributeslides.com/tributes/show/8BB5BTLD79WMZZM5 Donald Gene Hansen started flying with the angels on Wednesday, December 22, 2021. Six months after his birth on June 5, 1936, Don was adopted into the loving arms of Aage and Esta (Bond) Hansen. He grew up on the family farm in rural Shelly, Minnesota, and graduated from Halstad High School in 1954. After graduating high school, Don attended college at NDSCS in Wahpeton. In 1956 Don married Carol Anderson; they went on to have three children from this union. On July 6, 1991, Don married Mary Ann (Long) Good; together, they added four more children to the family. Don was an avid bowler, having bowled for more than 60 years of his life. In 2008 he received the Sponsor of the Year award from the F-M Bowling Association. While bowling in a non-sanctioned nine pin, no-tap tournament at Red River Lanes on April 14, 2012, he bowled an actual 300 game. He was later inducted into the F-M Bowlers Hall of Fame in 2017. Many of the lifelong friends he made at the lanes would also become his poker buddies. They would all come for Mary Ann's homemade chili and retire to the basement to play cards. Don also took an interest in cars; the older, the better. He could rattle off a string of at least twenty-five or more cars, all different, that he had over the course of his lifetime. Not to mention his ability to tell you the color, engine size, rim type, and other details of every car. Baseball was another favorite pastime of Don's. Not only did he enjoy watching the game (yes, he also still watched the Twins), he was a darn good player in his own right. He would always say, "baseball would be so much more enjoyable if they'd take business out of the game." Don is lovingly remembered by his wife, Mary Ann, children, Wayde (Lisa) Hansen, Cammie Hansen, and Gary (Donna) Hansen; stepchildren, Angie (Good) Hovde, Bryan Good, Bradley (Sandie) Good, and Christopher (Misty) Good; grandchildren, Emily Knight, Erin (Ben) Shustack, Cole Hansen, and Lilly Hansen; step-grandchildren, Nicholis Hinschberger, Krystal (Adam Cole) Lunn, and Johnathan, Jaycob, Morgan, Kayla, Kyle, Kimberly, and Sassy Good; along with great-grandchildren, Aiden and Devon Knight, Fiona and Jacob Shustack, and Westlynn Cole. Don was preceded in death by his parents.

The family of Donald Hansen created this Life Tributes page to make it easy to share your memories.

Send flowers to the Hansen family.