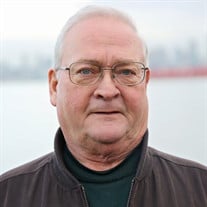 Don’s tribute video can be viewed here: https://www.tributeslides.com/tributes/show/6283LBWWCKCQM9LX Don's Celebration of Life can be viewed here: https://vimeo.com/558582577 Donald C. Gates was a beloved and exceptional son, husband, father, grandfather and friend. Don was born to Donald “Irish” and Jenny Gates on November 12, 1948 in Minot, North Dakota. The oldest of five children, Don was raised on a farm in Renville County and graduated from Mohall High School in 1966. Don attended the North Dakota State School of Science and graduated with a degree in drafting in 1969. Don’s ingenuity blossomed during his childhood on the farm, where he learned to fix whatever he had broken, and this education evolved into a passion for creative design and engineering. Don met Bonnie Wick at the White Eagle Ballroom in New Effington, SD and they were married April 25, 1970. Together they lived in Fargo and raised their two children, Stephanie and Philip. Don and Bonnie celebrated their 50th Anniversary in Mesa, AZ during the COVID-19 pandemic. Don had a great sense for what was important in life. He was unflappable and never cross with his children when challenges arose, he used them as a teachable moment. He was known for his quick wit and concise “Don-isms”, for example recommending “you should slow down before you stop” in response to his son crashing his mother’s car into the Fargo Coliseum. Don parked pretty much wherever he wanted. Don’s career spanned nearly 45 years, during which he found his true calling in designing, manufacturing, and selling sugar beet equipment. He and two friends combined their experience and founded Beetec, to bring new beet equipment to the market. In 1997, along with his business partner, Don was awarded a patent for a Folding Root Crop Defoliator. His belief and mission was to design and manufacture equipment that was practical. During his career, Don’s adventurous and independent spirit led him to travel throughout Europe, China and Japan, making lifelong friends and memories. Never officially retired, Don continued to maintain his interest in the agriculture industry and continued to work on design projects with friends and farmers. Don put literally millions of miles on GM vehicles over the years, a few of them through a blizzard, driver’s door open, the highway lines providing the only visible navigation. Don’s phone was always ringing with requests from friends for help, and Don’s commitment to service resulted in him always answering. Don served on several boards including; Big Iron, Alta Mesa Homeowners, Sugar Island Association, and most recently Park Place Homeowners. Don never shied from voicing his opinions as all of his fellow board members would agree. Don’s greatest joy was his family. He passed his adventurous and entrepreneurial spirit to his children. Don always encouraged them to think independently and that mistakes were part of learning. Becoming a grandfather was one of the highlights of his life, and he cherished his time with his children and grandchildren in Seattle. Always seeking to be helpful and of service, even in his final year he could be found under his daughter’s kitchen sink, installing a new faucet. He enjoyed spending time at the lake and in Arizona, working on his computer, and most of all visiting with his friends everywhere from fields to cafes. Don is survived by his wife of 51 years, Bonnie; daughter, Stephanie & Jeff Malek; son, Phil & Apryl Gates, and two granddaughters Betty & Vivian, all of Seattle; Mother Jenny Gates, Minot; Sisters Ann (Terry) Zeltinger Minot, Lynette Durheim, Forbes; Brothers James (Susan) Gates, Mohall; Jerry (Tamie) Gates, Bismarck. Two sisters in law, Marilyn Davis, San Jose, CA and Sandy (Nick) Rainsberry, Midwest City, OK; and numerous nieces, nephews and their children. Don was preceded in death by his father, Donald “Irish” Gates and three brothers in law, Jim Wheelihan, George Davis and Bruce Durheim. Don supported all of his friends and family’s interests. In remembrance of him, if you choose, please contribute to the New Life Center of Fargo, or the charity of your choice in his memory. A Celebration of Life will be at 3 pm, Wednesday, June 2, 2021 with a visitation one hour prior at the Avalon Events Center, Fargo, ND. Condolences and memories may be shared at www.hansonrunsvold.com

The family of Donald Craig Gates created this Life Tributes page to make it easy to share your memories.

Send flowers to the Gates family.