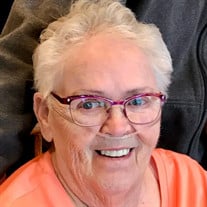 Diane's service will be seen here at 6pm, Tuesday, April 6: https://vimeo.com/533178647 Diane Kay Anders, 77, Fargo, ND, passed away Thursday, April 1, 2021 in Sanford Medical Center Hospice House. She was surrounded by her family, Pastor Chelle, and one of the many angels from Hospice, when she departed to greener lawns and immaculate golf courses. She was born Diane Kay Sigurdson in Fargo, ND to Magnus and Isabelle Sigurdson on 30 August 1943. She had three siblings; Janet, Darlene, and David. She attended Fargo schools, graduating from Fargo Central High School in 1961. In 1964 she met the love of her life, Lawrence (Larry) Anders. They were married 25 June 1966 in Fargo, ND. They started their lives together in Fargo, ND where they had their first child, Mike, in 1967. They had their second child, Laurie, in 1971. In early 1972 they moved to 7th Street West in West Fargo. Here is where they made “home”, making life-long friendships in a fantastic neighborhood with incredible neighbors. Diane had an extreme passion for sports and was competitive in every aspect of her life. She played softball, bowled, and golfed. She was a two time winner of the Fargo Women’s All City tournament. Winning in 1970 with a 675 series and then became the last to win the Emma Pierce Trophy in 1971 when she bowled a 606 series. Diane retired that trophy and the family maintains it today. Larry and Diane took up golf together and she became very good at the game. They fell in love with golf and purchased stock in Maple River Golf Club. Many incredible memories were made on that golf course whether it be a tournament, couples night, or just a night of golf with the neighbors. She was even competitive when it came to lawn care. She was very meticulous and proud of how her lawn and yard was kept. She was particularly honored to be named yard of the month twice. Diane worked at St. Johns Hospital as an X-ray administrative assistant until one of the doctors recommended that she become an X-ray technician. So she continued to perform administrative duties while she did on the job training to get her certification. She was shocked and proud when she passed her boards for Registered Technologist X-Ray Technology in 1971. She went on to work at St. Johns Hospital, West Fargo Medical Center, and Sanford Health before she retired in August 2012. Diane is survived by her husband of 54 years, Larry; brother David; her children, Mike (Sandie) Anders of Horace, ND, Laurie (Eric) Sousa of Fargo, ND; grandchildren, Brandon (fiancé Garret) Anders of Fargo, ND, Justin Anders of Fargo, ND, Austin (Nicole) Hansen of Cottonwood, MN, Alexandra (fiancé Mike Job) Hansen of West Fargo, ND, Caleb Hansen of Houston, TX, and Destinee Joy Hansen of Fargo, ND; great grandchildren, Griffin and Grayer Hansen, and Evelyn Job. She was preceded in death by her parents, Magnus and Isabelle, and her sisters, Janet and Darlene. The service can be viewed via Livestream through the Hanson-Runsvold website. The family would like to thank the wonderful staff at Sanford Hospice, Pastor Michelle Lyons-Hanson, and Hanson-Runsvold Funeral Home. In lieu of flowers the family asks that you donate to Hospice or a charity of your choosing. Diane's Tribute video can been seen and copies ordered here: https://www.tributeslides.com/tributes/show/FX3PLQP5CQFTKKLX

The family of Diane Kay Anders created this Life Tributes page to make it easy to share your memories.

Send flowers to the Anders family.