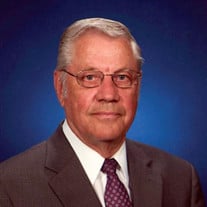 Deon's memorial service will be livestreamed here: https://vimeo.com/651141246 Deon Raymond Swanson, 86, passed away on November 21, 2021, from natural causes at the family lake home on Lake Maud, MN. Deon was born in Hallock, MN on June 11, 1935, the son of Carl and Elline (Anneson) Swanson. He attended school at Jefferson Elementary, Agassiz Jr. High, and graduated from Fargo Central High School in 1953. After graduating from high school Deon joined the U.S. Air Force on January 13, 1954, and was honorably discharged on July 28, 1961. Deon then joined the North Dakota Air National Guard and served as a full-time technician until his retirement in 1990. Deon served his country for 36 years. Deon was united in marriage on August 29, 1959, to his wife of 62 years Marilyn Gronland. They resided in the same home in north Fargo for 60 years. In his early years Deon spent his free time hunting, golfing, and being "at the lake." While as time went on Deon's body started to slow down causing his hunting and golfing days to be over, Deon continued to spend time with his family and "putzing" at the lake. Deon always enjoyed a conversation, a cup of coffee, and a good laugh. Above all, and throughout his life, Deon was a loyal and loving husband, father, grandfather, and great grandfather. Deon is survived by his wife Marilyn of Fargo; his son Jeff Swanson of Lake Maud, MN; his daughter Cathy (Mark) Hanson, Fargo, N.D; his daughter-in-law Carolyn (Dan DeLozier) Swanson, Gilbert, AZ; grandchildren Justin (Elise) Swanson, Jordann DeLozier, Molly Hanson, and Emily Hanson; his great-grand children Clark Swanson, Chase Swanson and Edie Swanson; his sister June Fernandez, St. Paul, MN; and many nieces and nephews. He was preceded in death by infant twin daughters Marianne and Maribeth Swanson, son Craig Swanson, and granddaughter Jessica Swanson. He was also preceded in death by his parents, his brother Marvin Swanson, sister-in-law Coney Swanson, and his mother and father-in-law Gilbert and Gena (Skare) Gronland.

The family of Deon Raymond Swanson created this Life Tributes page to make it easy to share your memories.

Send flowers to the Swanson family.