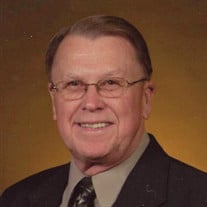 Dennis' Memorial Service can be viewed here: https://vimeo.com/465438229 Dennis L Wold was born on November 26, 1937, in Maddock, ND, to Paul and Violet (Lowe) Wold. Dennis spent his childhood playing and helping out on the family farm, collecting baseball cards, and competing in school sports. During his youth, Dennis was very active in FFA and 4-H, serving as chapter president and State Secretary in FFA. He represented North Dakota as an official delegate to the National FFA Convention and was one of four members selected to the American Youth Foundation Camp in Michigan in 1955. He was one of the original members of the North Dakota Key Club in 4-H and won numerous livestock judging contests, including first place at the North Dakota Winter Show in 1955. He graduated from the Benson County Agricultural and Training School (Maddock) in 1956. Dennis attended North Dakota State University in Fargo, earning a Bachelor of Science degree in 1960 and a Masters of Science degree in 1964. He was active in several collegiate organizations, including Alpha Gamma Rho fraternity. He joined the North Dakota Air National Guard and served for over 21 years, retiring with the rank of Master Sergeant. On June 23, 1963, Dennis was united in marriage to Myrna Emilie Anderson at Eden Lutheran Church, Sheyenne, ND. Together, they raised two children, Kevin and Kristi. Dennis taught Vocational Agriculture in Tappen, ND, for two years before joining the Ford Motor Company. He spent the next 40 years in the automobile industry. He worked for the Ford Motor Company in Fargo and Milwaukee, WI, for seven years as a factory representative. He then purchased half ownership in a Ford agency in Monticello, WI, where he worked for five years before selling his share and relocating his family back to Fargo in 1977. He was employed at Berkey Lincoln Mercury as a business manager for three years and then worked six years at Tim Corwin Buick and 20 years at Lunde Auto, retiring in 2003. After retirement, he worked part-time at Lunde Auto and in the NDSU Office of Registration and Records, where he helped with their conversion to digital records. Dennis was very active in the Masonic Temple Daylight Lodge #135 and El Zagal Shrine Directors Staff and the New Rockford Eagles Club. He and his family were long-time members of Olivet Lutheran Church. He loved traveling, attending NDSU athletics events, serving God and his country, and spending weekends at their second home on Leaf Lake, MN. Dennis will forever be remembered for his smile, positive outlook, and infectious laugh; his enduring adoration for his family and grandchildren; and his lifelong Bison pride. He brightened every room he entered and served as a true role model for living a life of gratitude, humility, and respect for others. Dennis is survived by his wife, Myrna; son, Kevin (Sheri) of West Fargo; daughter Kristi Wold (Brian) McCormick of Longmont, CO; and grandchildren, Thomas, Lynnzee, and Weston Wold of West Fargo, and Kellen and Connor McCormick of Longmont, CO. Dennis’ family will miss him immensely. Still, he will live forever in our hearts and in our treasured memories. Dennis passed away peacefully on September 10 at Essentia Hospital in Fargo with his son by his side. He was preceded in death by his parents and his sister, Mavis Arne. A brief Masonic service will be held 10:00-10:30 AM along with a visitation from 10:30-11:00 AM followed by a memorial service at 11:00 AM on Saturday October 10. Services will be held at Olivet Lutheran Church in Fargo, North Dakota. In accordance with CDC regulations regarding COVID-19, masks are required, and social distancing should be practiced. Memorials can be directed to the Olivet Building Fund, Masonic Language Center, Fargo or NDSU Foundation.

The family of Dennis L. Wold created this Life Tributes page to make it easy to share your memories.

Send flowers to the Wold family.