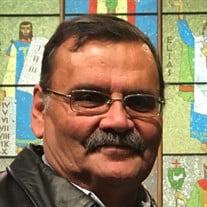 Dennis' funeral will be available to view here on Saturday, February 27, 2021 at 3:00 PM: https://vimeo.com/515353579 Dennis' Tribute Video can be viewed and copies ordered here: https://www.tributeslides.com/tributes/show/YB4XF6KGMP5NSDJT Dennis Robert Belgarde (Magoo), 65, of Moorhead, MN died peacefully February 19th, 2021 at Essentia Health in Fargo, ND. He was surrounded by his beautiful wife Gail and loving family. Dennis was born October 30th, 1955 in Belcourt, ND to Louis and Elizabeth (Betty) Belgarde. He grew up in Dunseith, ND and later attended school at the North Dakota State School of Science in Wahpeton, ND where he studied mechanic work and auto body. He later transferred to Hanson Mechanical to complete his education. He held many jobs over the years but most notably Glenn’s Body Repair and Lars’ Body Shop as an auto body technician. This was his career but also his hobby as he restored many projects over the years. He also enjoyed hunting, fishing, grilling, smoking meat, and keeping a well-kept lawn. Dennis married Gail (Champagne) on September 27th, 1974. He found family to be the most important thing in the world. “If you don’t have family, what do you have?”, he would say. He loved enjoying meals together, camping every year, chatting around a fire while looking up at the stars, and taking little getaways. He taught his family so many important lessons including the importance of respect, acceptance, forgiveness, work ethic, pride, how to love with all your heart, but above all the importance of FAMILY. He is an example of how to live a life to all. We are all so blessed to call him husband, dad, grandpa, and friend. Dennis was dad to more than just his children. He called anyone he knew “my boy” and “my girl”. He genuinely cared for everyone that crossed his path and wanted to know what was happening in their life. So many called him “Dad” and he absolutely was. There wasn’t anything he wouldn’t do for anyone. If you had the pleasure of meeting him even once you know he would talk about anything and everything but mostly his family. He had the most wonderful sense of humor and is known to yank a few chains to get a chuckle. He is survived by his wife, Gail; son, Robert (Amanda) Belgarde, West Fargo, ND; two daughters: Laura Belgarde, Fargo, ND; Jeny (Jordan) Runsvold; Fargo, ND; seven grandchildren: Alexandra Gunderson, Kristina (Nick) Smith, Marissa Mathison, Emily (Josiah Bjertness) Runsvold, Andrew Belgarde, Matthew Belgarde, Jack Runsvold, 3 great-grandchildren: Rachel, Mason, and Leah, siblings: Janice (Larry Gartzke) Morin, Fargo, ND; Debbie (Elvis) Gladue, Sylvester (Ginger) Belgarde, Tommy (Paula) Belgarde, Betty Jean Belgarde all of Dunseith, ND; and nieces and nephews. He is preceded in death by his parents, Louis and Elizabeth Belgarde; Stepfather Joseph Peltier; brother, Kenneth Belgarde and sister, Linda Bjugstad.

The family of Dennis Belgarde created this Life Tributes page to make it easy to share your memories.

Dennis&#39; funeral will be available to view here on Saturday, February...

Send flowers to the Belgarde family.