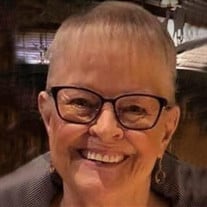 View Della's tribute video here. https://www.tributeslides.com/tributes/show/HPH5Z8WZZF7TXYMQ Della Marie Peterson, age 76, was called home on Sunday, June 6, 2021, at Sanford Medical Center in Fargo, with her family by her side. She was born September 26, 1944, in Fargo, ND, to Elmer and Faye (Brinkman) Bakkila. She graduated from Fargo Central High School in 1962. She married her first love, Ronald Peterson, on August 28, 1964. They made their home in Moorhead, MN, where they raised their two girls. They welcomed their first daughter, Kimberly, in 1967. The arrival of Kathy in 1977 completed their family. After the girls finished high school, Ron and Della moved back to where their love story began, in the heart of downtown Fargo. Della started her working career at the FM Hotel, in Moorhead, at the age of 14, working part-time as an Elevator Operator and later moved on to Night Auditor. Later, Della became the Store Manager for 25 years for the notable Catherine’s Collectibles in downtown Fargo, where she would greet patrons with her infectious smile and took pride in adorning the storefront window with charming displays. She was known for dressing the store in Christmas trimming and flare for the holidays. Della loved spending time with her family, reading, traveling, and winning jackpots at the casino. She was preceded in death by her parents Elmer and Faye Bakkila, sister Doris, and brother Ralph. Della is survived by her husband, Ronald Peterson of 56 years; brother, Allen Bakkila; two daughters, Kimberly (Robert) Lauf, Jr.; Kathy Hase (Darren Sprute); four grandchildren, Savannah (Lauf) and Nick Welch; Robert Lauf, III; Grant Hase and Grace Sprute; one great-grandchild, Ellis Welch; and many nieces and nephews.

View Della's tribute video here. https://www.tributeslides.com/tributes/show/HPH5Z8WZZF7TXYMQ Della Marie Peterson, age 76, was called home on Sunday, June 6, 2021, at Sanford Medical Center in Fargo, with her family by her side. She was born... View Obituary & Service Information

The family of Della Marie Peterson created this Life Tributes page to make it easy to share your memories.