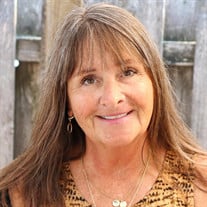 Debra Ann (Allen) Winzenburg was born in Grand Forks, ND, on July 6, 1959, to Ginger (Ulseth) Allen and David Allen. She died surrounded by her loving family in Denver, CO, on May 5, 2022, after a short battle with lung cancer. Upon her diagnosis, Debbie was determined to live life on her own terms and in the best way possible (and she did just that!). Debbie grew up in Fargo, ND, and graduated from Fargo North High School in 1977. She attended NDSU and graduated as a radiologic technologist from Fargo Clinic/St. Luke’s in 1980. She became a radiation therapist in 1984 and remained in this career until retiring in 2014, working at MeritCare in Fargo and Altru in Grand Forks, ND. On October 24, 1981, Debbie married the love of her life, Jim Winzenburg, at First Lutheran Church in Fargo. Jim and Debbie lived in Williston, ND, before returning to Fargo and welcoming their daughter Ashley in 1983 and son Lucas in 1985. The family enjoyed time camping with friends and attending the kids’ various activities. Many of Ashley and Lucas’ friends looked to Debbie as a “second mom” as she was ever-present for them. In 2014, Debbie and Jim moved to Denver to be closer to Ashley and their precious granddaughters Jocelyn and Sasha. Debbie’s death has left a void in many lives as she was a loving wife, devoted mother, “the best nana,” and a fiercely loyal friend. She had unique gifts for listening, understanding, and supporting. She prioritized relationships and always made time for those closest to her and was considered a best friend by many. Debbie will be remembered for her infectious laughter and ability to make others laugh; she could bring lightness to any situation. She had a very limited filter and you could always count on her to tell it like it is. Above all else, Debbie will be remembered for her love and compassion. She wasn’t one to say, “let me know how I can help,” and would always step in and offer support in the most helpful way. Debbie is survived by Jim Winzenburg (“Love you more”); daughter Ashley Christoff; son Lucas Winzenburg; granddaughters Jocelyn and Sasha Christoff; former son-in-law Mike Christoff; sister Jean (Doug) Clemens; sister Marissa Pomerantz and her children Nick and Brooke; sister-in-law Pat Erickson (Dave Turner) and nieces Melanie Adams and Kara Todd and children; brother-in-law Tom (Jan) Winzenburg and niece Jessica (Kris) Redka and nephew Zach (Liz) Winzenburg and children; aunt Mitzi Croxall; stepmothers Irene Allen and Marilyn Mehlhoff Barrick; and several cousins. She was preceded in death by her father, mother, grandparents, half-brother DJ Allen, and Jim’s parents. Per Debbie’s request, there will be no formal services. She asked that fun, lighthearted celebrations of her life be held in both Denver and Fargo. Plans will be made and finalized in the near future. The Winzenburg/Christoff family would like to thank their incredible network of friends and family for the outpouring of love and support shown to Debbie during the final months of her life. In lieu of flowers or gifts, please make memorial donations to your local hospice or a charitable organization.

Debra Ann (Allen) Winzenburg was born in Grand Forks, ND, on July 6, 1959, to Ginger (Ulseth) Allen and David Allen. She died surrounded by her loving family in Denver, CO, on May 5, 2022, after a short battle with lung cancer. Upon her diagnosis,... View Obituary & Service Information

The family of Debra Ann Winzenburg created this Life Tributes page to make it easy to share your memories.

Customized sympathy cards. Mailed for you.