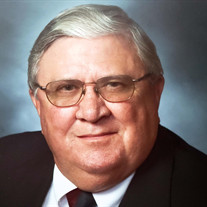 Dean Orel Wegenast, much-loved husband, father, grandfather and great-grandfather, and former Executive Vice President and board member of Bell Bank and State Bankshares, passed away on Tuesday, February 11, 2020, at Eventide in Fargo at the age of 83. Dean was born on July 16, 1936, to Adolph and Iris (Dunsdon) Wegenast in Edgely, ND, where they lived until 1950. They moved to Portland, ND, where Dean graduated from Portland High school. He then attended Dakota Business College where he met his wife of 59 years, Gail Ramona Korsgaden. They married in 1957 and lived together in Fargo until Gail’s passing in 2016. Dean started his banking career at Bankers State Bank as cashier, then moved to State Bank of Fargo (now Bell Bank) when it was chartered in 1966. He was the bank’s cashier, then executive vice president/chief financial officer before retiring in 1999. After retirement, Dean served as executive secretary of Bell’s board of directors until 2012, then became a board member of State Bankshares, the bank’s holding company, through 2019. Dean and his wife spent their last years together splitting time between their homes in Fargo, ND, Ft Myers, FL, and on Little Pine Lake near Perham, MN. Dean is survived by three children, six grandchildren and two great grandsons with a third on the way. Daughter Terry Aas (husband Dan) lives in Eden Prairie, MN, daughter Patty (Dykes) Lewis (husband Derek) lives in San Antonio, TX, and son Timothy Wegenast (wife Kari) lives in West Fargo, ND. Grandchildren are Andrew and Julia Aas of Minneapolis, Katrina (Dykes) King-Smith of Logarsce, Slovenia (husband Franny), Taryn (Dykes) Cardiff (husband Mason) of San Antonio, Stephany Wegenast of Fargo, and Nicole (Wegenast/Irwin) Wymore (husband John) of Wahpeton. Dean’s pride and joy the last few years were great-grandsons Kobie Irwin and John Dean Wymore, the children of Nicole, as well as one on the way. Dean is also survived by his sister, Dawn Holter (husband David) of Hatton, ND. Dean is preceded in death by his mother in 1978, his father in 1985, his brother Dennis in 2015 and his wife in 2016. The family would like to thank Eventide and Hospice of the Red River Valley for their wonderful care of Dean and family over the past few weeks. In lieu of flowers, the family requests that donations be made to Hospice.

Dean Orel Wegenast, much-loved husband, father, grandfather and great-grandfather, and former Executive Vice President and board member of Bell Bank and State Bankshares, passed away on Tuesday, February 11, 2020, at Eventide in Fargo at the... View Obituary & Service Information

The family of Dean Orel Wegenast created this Life Tributes page to make it easy to share your memories.

Send flowers to the Wegenast family.