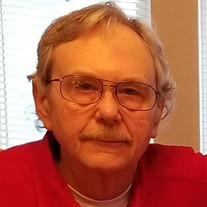 David Lynn Streed, 70, of Fargo, ND, passed away on Monday, February 24, 2020 in the Fargo VA Hospital under Hospice care after a brief battle with cancer. David was the first born to Arthur and Judith (Tovaas) Streed on August 22, 1949 in Fargo. He grew up in Fargo until 1961 when they moved to West Fargo. David graduated from West Fargo High School in 1967. David served in the US Army from Sept 1968 to August 1971. He was a member of Fargo VFW, Cootie, Fargo AMVETS, and the Harwood American Legion. After the army he went to Brown Institute in Minneapolis, graduated and was a radio disc jockey for several years. David worked for Shotwells Floral, Twin City Floral, JW Perrys, and after he retired he had a part-time job at Menards in West Fargo. He liked working there and would tell everyone, “I get my 10,000 plus steps in and I get paid to do it”, then he would laugh. He was a BIG Bison fan, holding season tickets since 1980. He loved to tailgate and a dream came true when he got his motorhome, the Bison man cave. He was preceded in death by his parents; brother, Arthur; infant brother, Jeffery; his beloved yellow lab, Babe; and the first dog he ever had, Queenie. David is survived by his sister, Joy Streed, Fargo; his last surviving uncle, Robert Streed, Fargo; sister-in-law, Bonnie Kvebak Streed, Fargo; nephews, Bryce (Tara) Streed and their children, Annika, Preston, Tucker and Sam; Courtney (Kristin) Streed and their children, Rylee and Chace; and many cousins. We would love for you to wear Bison attire to the service in honor of David. David loved to dance, so dance on bro, you will be missed.

David Lynn Streed, 70, of Fargo, ND, passed away on Monday, February 24, 2020 in the Fargo VA Hospital under Hospice care after a brief battle with cancer. David was the first born to Arthur and Judith (Tovaas) Streed on August 22, 1949 in... View Obituary & Service Information

The family of David Lynn Streed created this Life Tributes page to make it easy to share your memories.

Send flowers to the Streed family.