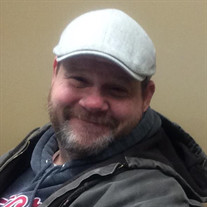 David Duane Reynen, 51, of Fargo, passed away unexpectedly on Monday, February 24, 2020 in Sanford Medical Center of acute coronary syndrome. Dave was born August 12, 1968 in Fargo at St. Lukes Hospital to Terry and Jan (Quenrud) Reynen. He graduated from Fargo North in 1986. Dave attended and graduated from Moorhead State University. While in college, Dave started working in radio, going on to work for various radio stations in Oakes, Fargo, St. Cloud, MN and eventually Orlando, FL. He moved back to Fargo and started working at WDAY, in both radio and television. He went on to do voice over work for commercials and video games, both locally and worldwide. Dave will be remembered for his distinct voice and quick wit. Dave was a member of the Provost Unit of the El Zagal Shrine, active with the Fargo Shrine Circus and the North Dakota Shrine football game. Dave is survived by his beloved partner, Lisa Hamre and cat Luna, his parents, Terry and Jan Reynen, sister, Andrea (Tim) Sterkel, nephew, Peter Sterkel, and nieces, Elena and Olivia Hamre. Dave was preceded in death by his grandparents, Dorothy and Harris Quenrud and Lila and Theodore Reynen. In lieu of flowers, please consider a donation in Dave’s name to the Scottish Rite Children’s Language Disorder Center, Fargo.

The family of David Duane Reynen created this Life Tributes page to make it easy to share your memories.

David Duane Reynen, 51, of Fargo, passed away unexpectedly on...

Send flowers to the Reynen family.