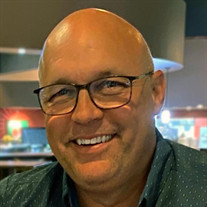 Dave's Tribute video can be viewed here: https://www.tributeslides.com/tributes/show/FZ4KKJ24C2QNJPKY Dave's service can be viewed here: https://boxcast.tv/view/david-dale-isaak-service-uehs706js2quvsa7djjn David Dale Isaak was born on February 16, 1967, to Larry and Lois Isaak of Fargo, ND. Dave grew up in Bismarck, ND, where he excelled as a talented athlete. He wrestled on state championship teams in high school and went on to wrestle in college at BSC and Minot State. While attending Minot State University, he met his wife Sharyl (Shari Schulz) Isaak. They were married on June 29, 1991, in Washburn, ND. Post college, Dave taught at Minot High before moving to Fargo, to work in the family business. He was a successful businessman working countless hours to grow and improve the hotels he and his wife owned in both Fargo and Grand Forks. The many hours he spent in his business were all hands on, from procuring new contracts to changing over rooms when needed. If you ever had the chance to see him at the hotel working you would be met with a wide welcoming smile as you saw him diligently working through whatever was needed that day. He worked extremely hard to be able to share his legacy with his two boys, Grant and Victor. Dave was able to serve our country through service in the Army National Guard before retiring with 20 years of service at the rank of Major. Dave was awarded the outstanding officer of the year in both 1995 and 2003. Dave’s greatest joy and accomplishments in life were all centered around his love and service toward his family. He spent countless hours volunteering in the kids' sports, including both Swimming and Football. As a member of the Lions Club he was presented with the Melvin Jones Award, which was awarded because of his work with the Lion’s All-Star Basketball team. Additionally, Dave was willing to help anyone and spent many countless hours in the community volunteering. Dave would do anything for anyone, and just enjoyed truly being helpful to others. Dave had an infectious personality; he would light up the room when entering. He was able to talk to anyone, and he always had a story to tell. Above the entryway to the Isaak home reads a quote from Abraham Lincoln “It doesn’t matter the years you live; it matters what you do with those years.” Dave did just that. He lived life to its fullest, he accomplished an incredible amount, and he did so as he loved his family fiercely. On Sunday, September 26, 2021, Dave passed away peacefully in his sleep of natural causes. David is preceded in death by his mother (Lois Isaak). He is survived by his wife of 30 years, Shari; sons, Grant and Victor Isaak; father, Larry Isaak; sisters, Jeanine Doerr, and Debbie Dosch (Mark), as well as many nieces and nephews, friends and co-workers. In lieu of flowers, please consider donating to Gateway Lions or Hope Lutheran Church. Dave's tribute video can be viewed here: https://www.tributeslides.com/tributes/show/FZ4KKJ24C2QNJPKY

The family of David Dale Isaak created this Life Tributes page to make it easy to share your memories.

Send flowers to the Isaak family.