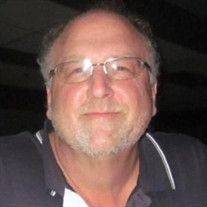 Dan’s service will be live-streamed and can be viewed later here: https://boxcast.tv/view/service-for-dan-heim-qxhyepxcaejua8sv5mdl Daniel Jon Heim, 61, passed away at Sanford Health in Fargo, ND on January 8th, 2021. Dan was born on November 12, 1959, in Fargo, ND to Mel and Jean (Blow) Heim. He graduated from Fargo North High School in 1978. His time in school was spent playing football and raising hell, while outside of school he was either at the lake or on the slopes with a pair of skis strapped to his feet. Dan enjoyed his work as a salesman and estimator in the floorcovering industry throughout his adult life. He knew the value of spending a little extra for quality and was able to earn the trust of his customers and coworkers with his honesty and integrity. Outside of work, Dan enjoyed riding in his 1969 Oldsmobile Cutlass, trying many different restaurants and styles of cuisine, and going to the lake. Dan’s greatest passion was his son, Grant, who meant more to him than words can describe. Dan was very active in Grant’s life as a Boy Scout leader and a coach for his sports teams. While Grant was his only son, Dan looked out for all of Grant’s friends as if they were his own. He enjoyed teaching the neighborhood kids baseball, taking them bowling, and throwing them off a tube any chance he could get. He wanted nothing more than for everyone to join in on the adventures, which included buying a wakeboarding boat for everyone to enjoy the summers together. Dan truly was a selfless man. Dan had a love for friends, and he had more than you could count. He particularly enjoyed meeting with his former Fargo North classmates for drinks and conversations at Slammers. His love of margaritas was legendary, and he made sure he always had some on hand for the friends who would drop by. We will miss him dearly. Dan was preceded in death by his son Grant, father Mel, mother Jean, sister Deborah and brother David. He is survived by his nephew Mason Heim of Fargo, ND, nieces Chandra (Heim) Kramer (Queen Creek, AZ), Amanda Backstrom (Maple Grove, MN), and Elizabeth Heim (Detroit Lakes, MN), as well as several great-nieces and great-nephews. Services will be held at Hope Lutheran Church in North Fargo on Monday, January 18, 2021 at 10am. In lieu of flowers, please consider a donation to Kamp KACE or the Roger Maris Cancer Center.

Dan&#8217;s service will be live-streamed and can be viewed later here: https://boxcast.tv/view/service-for-dan-heim-qxhyepxcaejua8sv5mdl Daniel Jon Heim, 61, passed away at Sanford Health in Fargo, ND on January 8th, 2021. Dan was born on... View Obituary & Service Information

The family of Daniel Jon Heim created this Life Tributes page to make it easy to share your memories.

Dan’s service will be live-streamed and can be viewed later here:...

Send flowers to the Heim family.