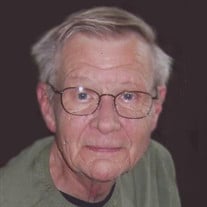 Curt's funeral service will be live streamed here on Friday, January 15, 2021 at 2:00 P.M.: https://vimeo.com/499629737 Curtis (Curt) Kyllo, 77, Fargo, died Friday, January 8, 2021 at Sanford Medical Center. Curt was born on April 9, 1943 in Fargo, ND to Archie and Ina Kyllo. He grew up on the family farm in the Harwood area. He attended two different country schools through the second grade, then attended West Fargo school. He graduated in 1961. Curt farmed in the area until 1995. He then went onto work for 10 years for Frank McKones in Fargo. He drove school bus for two years for Norther Cass School District. When he moved to Fargo, he began to drive school bus for eight years for Fargo Schools. Curt had to retire bus driving due to health reasons. Curt had hobbies that included bowling on a league for many years and loved watching car races. He also helped snow removal for the church and all the neighbors. Curt is survived by his wife Linda, Fargo; two daughters Alison Rock, Oregon, and Sarah Kyllo, Oregon; three grandchildren, Madison Rock (Amz), Moorhead, Salena Rock, Moorhead, and Josie Rock, Oregon; brother, Richard, Colorado and sisters, Karen (Ron) and Diane (Clark), Fargo. He is preceded in death by his parents, Ina and Archie Kyllo and sister-in-law, Reita Kyllo. A private funeral service will be held Friday, January 15, 2021 at 2:00 P.M.

The family of Curtis Kyllo created this Life Tributes page to make it easy to share your memories.

Curt&#39;s funeral service will be live streamed here on Friday,...

Send flowers to the Kyllo family.