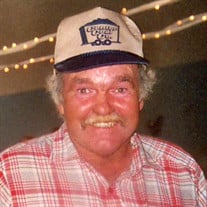 Clifford Duncan Stewart, 68, passed away at Sanford Health in Fargo, ND, on January 18, 2021. Cliff grew up in St. John, ND, where a love of horses developed. As a young man, he became a professional jockey with many adventures in the Midwest and Canada. He then enlisted in the army, completing a tour in Vietnam with the 101st Airborne division. After returning home, he started a career as a heavy equipment operator. He worked for several companies over the years, including his own and later with his sons. As Rolette County Commissioner, he strived to be fair and complete the work of the community. He took great pride in his work and loved doing it. He was the proud father to Kristi, Sam, and Todd Stewart. After remarrying, he and the family moved to rural Valley City, ND, where he lived until his death. Although he missed the trees and friendships of “the bush,” he found a new home to share his passions and many tales with his granddaughters. Cliff enjoyed coffee, visiting with anyone, working with horses, and a few country/western dances on Saturday nights. Cliff was rich in family and friendships. Even as his body failed, he felt lucky in life. Cliff is survived by his two sons: Sam Stewart of Fargo, ND and Todd (Denise) Stewart of West Fargo, ND; Granddaughters: Hannah and Gracie Stewart Step-children: Jason Mougey, Jodi (Mark) Stenburg of Bismarck, ND, Toby Mougey of Valley City, ND, Anna Lyons, and Mary Hruby; brothers: Doug Stewart of St. John, ND and Kenny Stewart of Washington; sisters: Carol Bonn of Devils Lake, ND, Evelyn Hood of Puyallup, WA, Ann Bonn of Wahpeton, ND, Lois Lowrimore of Devils Lake, ND, and Nancy (Mike) Hanlan of St. John, ND. He was preceded in death by his daughter Kristi Wau Stewart, his parents Roy and Jessie Stewart, brothers: Alvin, Glen, Harry, Duane, and Jerry Stewart; and sister: Dorothy Lafromboise. Cliff will be laid to rest next to his daughter at the St. John cemetery at a later date. The family asks, in lieu of flowers, please donate to your favorite veteran organization or local American Legion in memory of Clifford.

Clifford Duncan Stewart, 68, passed away at Sanford Health in Fargo, ND, on January 18, 2021. Cliff grew up in St. John, ND, where a love of horses developed. As a young man, he became a professional jockey with many adventures in the Midwest... View Obituary & Service Information

The family of Clifford Duncan Stewart created this Life Tributes page to make it easy to share your memories.

Clifford Duncan Stewart, 68, passed away at Sanford Health in...

Send flowers to the Stewart family.