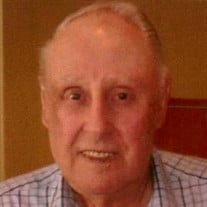 Clarence's Graveside Service can be seen here: https://vimeo.com/476360381 Clarence W. Heinrich, 90, passed away on Tuesday, November 3, 2020 at the Fargo VA Hospital. Clarence was born on March 7, 1930, to John and Caroline (Reister) Heinrich. He attended country schools then school in Medina, ND. He then continued to work at his family farm. He entered the Army in 1952, in which time he spent time in France. He was honorably discharged in 1954. Clarence married Bernice Beck on December 7, 1957 in Hatton, ND. Bernice passed away in 2006. He attended Hanson’s Auto School for Heavy Equipment Operator, later working for Northern Improvement Co. for 7 years, Abbott, Arne & Schwindt Co. for 6 years and Sorrenson Construction for 20 years before retiring in 1992. Clarence was preceded in death by his parents, wife, Bernice, son, Loren, daughter Camie, two sisters, and three brothers. A graveside service will be Friday, November 6, 2020 10:00 AM at Sunset Memorial Gardens, Fargo, ND.

The family of Clarence W. Heinrich created this Life Tributes page to make it easy to share your memories.

Send flowers to the Heinrich family.