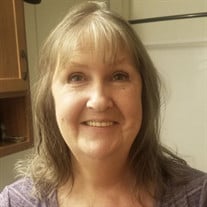 On Tuesday, May 11, 2021, Cindy passed away peacefully at home surrounded by her children and loved ones. Cindy was born on April 29, 1957, in Detroit Lakes, MN. Shortly after, the family made their way to Waterloo, IA. She was the oldest of 5 children, because she was too stubborn not to be! At the age of 14, she sang and played acoustic guitar in various local bands. She graduated high school and continued on to take classes at Hawkeye Community College. In 1976, she married John Reed and had two children, Tommi and Sean. They later divorced. Within that time frame she worked as an aide at St. Francis Hospital where she cared for special needs children as if they were her own. In her younger years, she loved to go dancing, travel, and really loved vacationing in Hawaii. In 1986, she met Harold Johnson whom she had one child with, KayLee. They later separated, but remained dear friends until his passing in 2007. Cindy’s soul was like a ship on the ocean; when the wind hit the sails and the ship hit the fan, Cindy was on her way to her next adventure. In 1991, while being a very talented bartender and social butterfly, Cindy met William "Bill" Begg at Wannabes Lounge. A few French Canadian words from him and she was smitten. They married in 1995 in Galena, IL. She had found her soulmate. In the summer of 1999, Cindy and Bill packed up the family and moved to Fargo, ND, where they put down roots. They enjoyed a life full of love and fireworks. Sadly in December of 2008, Bill passed away and she never loved another again. Cindy enjoyed the simple life, "the less, the better," and "you can't take it with you," she would always say. She loved spending her summers garage sailing, taking trips and bringing the grandchildren to the park. In the colder months she enjoyed going to the casino and QVC shopping for Christmas. She had the best sense of humor and loved to tell stories of herself and others. Cindy was all about family and helping others. She had such a love for animals and welcome any that crossed her path. She was truly one of a kind. Cindy is forever loved and missed by: Brothers, Mark (Laura) Newgren, Todd Newgren (Kim), and Sister, Robin (Bob) O'Hara; uncle James "Jimmy" Newgren; her daughter Tommi Spencer (Laurence), son Sean Reed (Ashley) and daughter KayLee (Dan) Gunderson ; grandchildren LaReina (Jeff) Molina, Sierra Begg, Carly Begg (Dustin), Sadye Gunderson, Mya Gunderson, Kannon Gunderson, Paityn Gunderson, and Jason Reed. Along with 5 great-grandchildren, many nieces and nephews and her chosen life long friends. Cindy is united in Heaven with: husband Bill; grandparents Edgar and Esther; parents Robert and Effie Newgren; brother Steven Newgren; Sister-in-Law Donna Newgren; fur babies Daisy, Jiggy and Mr. Boo, and 2 angel babies. The family is holding a private celebration Friday. If anyone would like to send their condolences please contact the funeral home, or Family directly.

On Tuesday, May 11, 2021, Cindy passed away peacefully at home surrounded by her children and loved ones. Cindy was born on April 29, 1957, in Detroit Lakes, MN. Shortly after, the family made their way to Waterloo, IA. She was the oldest of... View Obituary & Service Information

The family of Cindy Lou Begg created this Life Tributes page to make it easy to share your memories.

Send flowers to the Begg family.