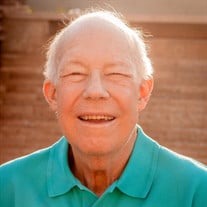 Christian's Memorial Service can be viewed here: https://vimeo.com/569928041 Christian D. Golding passed away peacefully in Hospice care at his home in Goodyear, Arizona on May 22, 2021, after a two-year battle with cancer. He was born in Washington, D.C., on July 23, 1947, to Donald G. Golding and Mary Ann (Christensen) Golding. He spent his youth in Fowler and La Junta, Co. He excelled athletically and academically and graduated from La Junta High School in 1965 with highest honors. He was also recognized as a National Merit Scholar and member of the National Honor Society. He went on to attend the University of Colorado and the University of Maryland where he received his degree in 1975, graduating with honors. Chris worked in sales and put himself through college working for IBM. Chris found his perfect match when he married his beloved, Dinah (Bright) Golding on July 26, 1998. And through marriage, he became a bonus-Dad of three children, Amy, Sarianne, and Adam, who he loved and cared for as his own. As a family, they lived in Denver and eventually moved to Fargo when he became a first-time Papa. As a born salesman, Chris was involved in various ventures. In his most recent years, he and Dinah worked as a team with The Healthcare Initiative. Chris was as devoted to his faith as he was to his family. He played an active role in Gethsemane Episcopal Cathedral serving as a verger and attended All Saints Episcopal Church in Phoenix. When Chris married Dinah, he also married her family. And during their years together, Chris had a close relationship with his father-in-law, the late Hon. Myron H. Bright. Chris fondly referred to him as "Pops" and Myron said he was his "favorite Republican". Chris cherished their bond and thought of Myron as a father. Together, they spent time enjoying vibrant discussions and debates. Chris enjoyed summers with the family at the Bright Cabin on Lake Melissa. He especially cherished the time spent with his seven grandchildren - teaching them his love for the game of golf and the appreciation of burnt peanut butter toast. He enjoyed perfecting the perfect chocolate chip cookie, newest cake creation, and fine-tuning household organization. Chris became a true Bison football fan, attending games with Pops and the grandkids. He loved watching University of Maryland football and hockey games played by his grandsons. Above all, he savored any opportunity that allowed him time with a golf club in hand, playing with his brothers or friends at his favorite course, the Detroit Country Club. In 2018, he and Dinah built a home in Goodyear and enjoyed time in the Arizona sunshine and on the golf course. While the time they had in Arizona was brief, they enjoyed it together. Chris had an infectious smile that caught the attention of anyone he met. He loved life and those who surrounded him. He will forever be missed by all whose lives he touched. He is survived by his beloved wife, Dinah A. Golding, Goodyear, AZ/ Detroit Lakes, MN; brothers Dennis (Nancy) Golding, Douglas (Janet) Golding of La Junta, CO; brother-in-law Josh Bright, Detroit Lakes, MN; brother-in-law Howard (Susan) Miller, La Junta, CO; children Amy (Jim) Long, Fargo, ND; Sarianne (Brock) Dickson, Harwood, ND; Adam (Kim) Schultz, Shorewood, MN; seven grandchildren, Will, Connor, Henry, Collins, Maxum, Mason and Addison; two nieces, and a nephew. Chris was preceded in death by his mother, Mary Ann Golding, father, Donald G. Golding, sister Pamela K. Miller, and beloved pet companions. A memorial service will be held on July 1, 2021, at 2:00 PM, at Gethsemane Episcopal Cathedral, Fargo. Memorials in lieu of flowers can be made to A Shelter for Cancer Families (Houston), Hospice of the Valley (Arizona), Gethsemane Episcopal Cathedral, and Temple Beth El (Fargo) or All Saints Episcopal Church (Phoenix). Chris's Tribute Video can be seen and copies ordered here: https://www.tributeslides.com/tributes/show/KD8B6LW6MMGB44ZL

Christian's Memorial Service can be viewed here: https://vimeo.com/569928041 Christian D. Golding passed away peacefully in Hospice care at his home in Goodyear, Arizona on May 22, 2021, after a two-year battle with cancer. He was born in... View Obituary & Service Information

The family of Christian "Chris" D. Golding created this Life Tributes page to make it easy to share your memories.

Send flowers to the Golding family.