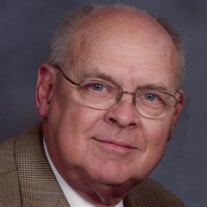 Husband, Father, Mentor and Friend - Chris Albert Paustian passed away in the early hours of Thursday, June 4, 2020 at Eventide Fargo. A Funeral Service for Chris will be streamed at the following link at 10am on Wednesday, June 9, 2020 and will also be available after: https://vimeo.com/427403903 Chris was born in Davenport, Iowa on June 24, 1942 to Christian and Lanora Paustian, the youngest of five children. He graduated from Durant, Iowa high school in 1960. After high school, he attended the Iowa State Teachers College in Cedar Rapids, Iowa, and then enlisted in the United States Air Force, eventually being stationed at Grand Forks AFB, where he continued to serve during the Vietnam conflict. He was eventually honorably discharged and started attending the University of North Dakota, majoring in Business and Public Administration. During this time he met a girl named Sondra (Sandi) Waller, a skater and hockey player from Crookston, MN. They loved to dance at the Westward Ho in Grand Forks. They fell in love and on March 2, 1968 were married at Trinity Lutheran Church in Crookston. The young married couple settled in Grand Forks, where Chris worked at Bridgeman Dairy loading ice cream while he attended UND, and Sandi worked at JCPenney supporting them. They lived in a small grey house on Cherry Street, and they welcomed their first child Christian in 1970. They moved to Sioux Falls, SD, where Chris worked as a teacher at Sioux Falls Washington High School and Southeast Technical Institute. He also continued his higher education at the University of South Dakota, obtaining a MS from the USD School of Education. Chris and Sandi also welcomed their second child Timothy in 1973. In 1975, Chris became the director of North Valley Vocational Technical Center in Grafton, ND, a position he held until 1985. Chris often spoke of North Valley with fondness to his family, about his co-workers, whom he loved. The years in Grafton were some of the best years - a house in the country with a big yard, trees, and a sunflower field for a backyard. Chris spent many hours retrieving footballs from the trees surrounding the house. In the fall of 1985, Chris became the President of Mitchell Technical Institute in Mitchell, SD, where he worked until his retirement in 2008. During his tenure at MTI, the school grew in its student enrollment, its curriculum, and, arguably most significantly, the relocation of the MTI campus to a new site, with the addition of a new technology center. Thanks in great part to Chris, MTI is a leader for telecommunications and technology for South Dakota. The year of 1998 brought the first girl to the family - Chris and Sandi were overjoyed when Tim married Alyssa Larson - the following years brought two grandsons, Zachary and Andrew. Chris was SO PROUD of them. He loved going to their football and hockey games, and track meets. Andrew would have aced every class at MTI - Building, Welding, Woodworking. During Zachary’s freshman year at Concordia College, he worked with Chris often - and these were not typical freshman courses - a class called “Evil” was their favorite - explorations of behaviors that Chris and Zachary discussed at length. Chris was always willing to not only teach, but also learn. Chris was very active in the community. Notable are these areas in which he served: Commander of the American Legion and Chef de Gare of the 40 et 8 in Grafton, ND President of the Mitchell Rotary Club Chairman of the Avera Queen of Peace Lay Advisory Board President of the Mitchell Prehistoric Indian Village and Preservation Society Congregational president of First Lutheran Church, Mitchell SD Member of the Taxpayer Advocacy Panel Of these, he found great joy in serving the community as a Rotarian. From his presidency, to the development of Rotary Park in Mitchell, to his ambassadorship, Rotary gave him a platform to help better the community for all. Even before he was a Rotarian, he lived his life via the Rotary International Four-Way Test: Is it the TRUTH? Is it FAIR to all concerned? Will it build GOOD WILL and BETTER FRIENDSHIPS? Will it be BENEFICIAL? Thank you, Rotary. Chris is survived by his sons Christian, Surprise, AZ, and Tim, Fargo, ND, his daughter-in-law Alyssa, grandsons Zachary and Andrew, his sisters Alberta and Lucille, and his many nieces and nephews. He was preceded in death by his parents Christian and Lanora, his brother Dilver, sister Jean, and his wife of 51 years, Sandi. Chris’ family is extremely grateful for the care provided by the staffs of Elim Care Center and Eventide Fargo. Thank you. Visitation: Tuesday, June 9, 2020 from 5-7 PM at Hanson-Runsvold Funeral Home, Fargo, ND. Funeral: Wednesday, June 10, 2020 at 10 AM at Hanson-Runsvold Funeral Home, Fargo, ND. Burial will be at the Fargo National Veterans Cemetery. Memorials are preferred to be given to: Fargo - West Rotary PO Box 9237 Fargo, ND 58103

Husband, Father, Mentor and Friend - Chris Albert Paustian passed away in the early hours of Thursday, June 4, 2020 at Eventide Fargo. A Funeral Service for Chris will be streamed at the following link at 10am on Wednesday, June 9, 2020 and... View Obituary & Service Information

The family of Chris Paustian created this Life Tributes page to make it easy to share your memories.

Send flowers to the Paustian family.