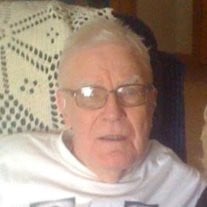 Chet Gebert was born August 11, 1927 in Princeton, Minnesota. He was the youngest child of William and Ida (Noeske) Gebert. Even though his love of travel found him globe trotting after raising his family, Chet lived and worked most of his life within 250 miles of his hometown. He graduated from the University of Minnesota's School of Journalism in 1950 and married Violet (Kallman). They started their family in New Ulm, Minnesota where Chet served on the news staff for the New Ulm Journal. Four years later, he accepted a new assignment and worked for 37 years as a reporter/photographer for the Fargo Forum. As a young man, Chet won the coveted Graflex Grand Prize for his series of photographs of the devastating F5 tornado which tore through Fargo on June 20, 1957. He was one of the Forum's team that covered that historic tornado for the paper's Pulitzer Prize. 25 years later, Chet followed the journey of the replica Viking ship, the Hjemkomst ("homecoming" in Norwegian) all the way from its genesis in builder Robert Asp’s brain to its eventual entry into the harbor of Bergen, Norway, in July 1982. He was one of the ceremonial passengers as the ship sailed into New York harbor and he was in Norway when she made landfall a few weeks later. Chet was passionate about the 1000 year old, perfectly round geological formations he found at the bottom of the Rum River near his family's farm and was overjoyed (as was everyone else who'd been hearing about them for decades) when the Mille Lacs County Historical Society added the balls to their collection in 2012. Chet enjoyed fishing almost as much as meeting new people and laughing at a good joke. He spent peaceful summer days on Cormorant Lake with a rod and reel and a fishing buddy changing lures and "telling lies" (Chet's endearing term for small talk). Nothing tasted as good as Walleye Pike. Nothing. Chet loved to travel, visit new places, experience new cultures and meet new people. He shared his passion with friends and family traveling to exotic locations like Alaska, China, and "the Land Down Under" - Australia and New Zealand. With his beloved wife, Sharon (Buck), he explored foreign and domestic locales and had new adventures and made lifelong friends wherever he went. He remembered the people with unusual names and strong handshakes, who told a good joke or offered a helping hand along the way. Chet had strong opinions and a soft spot for babies. He was charmed by the innocence of children and constantly amazed by nature's splendor. He was moved to tears by the flight of an eagle and was fiercely loyal to his friends, old and new. Chet is survived by three daughters: Valerie Gebert of New York, NY, Kimberly Stephens of Jacksonville, FL and Peggy Adamick of Pocahontas, IL; two grandsons, Christopher Michael Stephens and Colton James Adamick; one granddaugher Danielle Rose Arviso and one great-grandson, Caine Reid Stephens. Thank you for your enthusiasm, Dad; you showed us how to appreciate each day and revel in every adventure along the way. We love you. Chet's video tribute can be viewed at http://www.philpetersonproductions.com/hr-memorials.htm

Chet Gebert was born August 11, 1927 in Princeton, Minnesota. He was the youngest child of William and Ida (Noeske) Gebert. Even though his love of travel found him globe trotting after raising his family, Chet lived and worked most of his... View Obituary & Service Information

The family of Chester Alfred Gebert created this Life Tributes page to make it easy to share your memories.

Send flowers to the Gebert family.