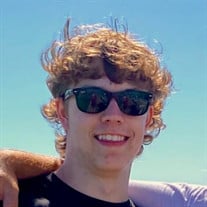 Charlie's funeral service can be viewed here. https://vimeo.com/695794514 Charlie's tribute video can be viewed here. https://www.tributeslides.com/tributes/show/9874KD35883BYW4S Charles Scott Schnell, "Charlie", passed away at his home in McLean, VA, on Sunday, March 27. He was 16. Born in Concord, MA, on July 18, 2005, Charlie spent his early years in New England, making lifelong friends at Nashoba Brooks and Fessenden Schools, before moving with his family to Great Falls, VA, in 2012. He attended Great Falls Elementary School, The Langley School in McLean, and The Landon School in Bethesda. At each, he was quick to make friends, join teams, and win hearts. His bright and contagious smile, blonde and thick wavy hair, and happy and welcoming nature were his trademark. Charlie was tall and athletic with a commanding presence, but it was his soft and kind heart that defined him. He will always be known best for his loyalty, compassion, and commitment toward friends, his love for and devotion to his family, and his endless desire to join in and lift up. Charlie loved his years climbing the Little League brackets, as much for his chance to play and be with friends as for his success. One of his proudest sports accomplishments was making the Madlax DMV club lacrosse team the summer before high school and joining this special community for the years that followed. This early foundation drove his strong athleticism and sense of community across the football, wrestling, and lacrosse teams at school. Among his many fun accomplishments, friends and family still marvel at the ease with which Charlie did standing front and backflips at 6'2" and 180 pounds - and cherish the spontaneous big energy and silly spirit that made him so inclined. Off the field, Charlie loved music, dinners with family, social gatherings with friends, and anything Star Wars, conquering the complete Lego series, watching every movie, and collecting ALL clone action figures. He adored time with family on school vacations shooting skeet, running around a paintball field, and, most recently, sport fishing and parasailing in Key West. One of his favorite places was Lake Melissa in Minnesota. His family always spent summers and holidays in the Midwest. It is here where Charlie embraced water sports. It is here where he learned how to jet ski, surf on a hydrofoil, water tube, and drive a boat. It is here where he will be laid to rest. Charlie is survived by his parents, Dawn and Scott Schnell, his sister Katherine, and by a rescue dog, he named Mudge. "My strength is as the strength of ten because my heart is pure" - Alfred Lord Tennyson.

The family of Charles Scott Schnell created this Life Tributes page to make it easy to share your memories.

Send flowers to the Schnell family.