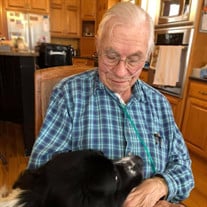 Chuck’s service will be live-streamed here: https://boxcast.tv/view/funeral-for-chuck-koski-duv4sh1ewpjq1hm9frbb Chuck's Tribute Video can be viewed here: https://www.tributeslides.com/tributes/show/TQ2D5C66G4LXPCPD Charles Gust Koski (Chuck) was welcomed into heaven on Friday, January 22, 2021. Chuck was born December 30, 1939, to Gust and Margaret Koski, Tower, Minnesota. Chuck was very proud of his own father's service to our country during WWII as part of the FBI, being transferred from MN to NJ and back to MN. Chuck graduated in 1957 and participated in swimming and track. He then attended Virginia Junior College, transferring to the University of Minnesota for Medical School. He graduated in 1964 and completed his medical internship at Hennepin County General Hospital, Minneapolis, MN. Chuck was united in marriage to Elnora Annette Brown (Anne) in August, 1962. Chuck entered into the US Army and was assigned to the Second Infantry Division in Korea on the DMZ, 1965-1966. His first child, Shelley Ann, was born during this deployment in 1965, and they relocated to Salt Lake City, UT for Chuck to complete his military commitment. The family returned to MN, where Chuck resumed his medical studies and he welcomed his only son, Mark Charles, in 1968. The growing family moved to Rochester, MN, where Chuck completed his neurosurgical training at the Mayo Clinic. Chuck and Anne then welcomed a daughter, Connie Lynn, and the family relocated to Fargo, ND. Chuck joined The Neuropsychiatric Institute as a staff neurosurgeon in October, 1973. He was then associated with The Fargo Clinic, and subsequently, MeritCare. It was here that their last child, Deborah Lee, was born in 1976. Chuck was proud of his professional accomplishments including President of the MN Society of Neurological Sciences, 1980; a Fellow of the America College of Surgeons; past chair of the ND State Chapter of the American College of Surgeons Committee on Trauma; former member of the American College of Surgeons National Committee on Trauma; and his involvement in the National Advanced Trauma Life Support Program. As proud as he was of his professional achievements, they were eclipsed by Chuck's privilege to have been part of the Bible Study Fellowship (BSF) International for 27 years. He felt called to serve the Lord as a leader in the Children's Program of BSF and enjoyed his weekly BSF studies with his close friends and brothers in Christ. As COVID prevented him from gathering with family, he and Bonnie learned how to participate in Zoom meetings. Every Sunday, gathered with his children (and some grandchildren) Chuck led his family in weekly Bible studies and chats. It was during these meetings that Chuck was reassured that all of his children would be meeting him in God's Paradise. We treasure these memories, sharing our love for one another and our love for the Lord. Chuck met Bonnie Winzer and they were married before God at Hope Lutheran Church, Fargo, ND, on February 27, 1999. As he and Bonnie became one, his family grew to add Michelle, Nicole and Char. Chuck is reunited in heaven with his parents, Gust and Margaret Koski, loving dogs Max and Bailey. He will be dearly missed by his loving wife, Bonnie; sister, Karen (Ron) Gilbert, Southport, NC; Anne Koski, Sartell, MN; children Shelley (David) Shaffer, Moose Lake, MN; Mark (friend, Heidi) Koski, Hudson, WI; Connie (Aaron) Stein, Sartell, MN; and, Deborah (Aaron) Meester, Sartell, MN. Chuck was Grandpa to 5 grandsons and 5 granddaughters. He also became a father to Bonnie's children; Michelle Gardner, Thornton, CO; Nicole (Jason) Knopik, Mandan, ND; and, Char (Matt) Simon, Fargo, ND and Grandpa to 3 grandsons and 5 granddaughters. In lieu of flowers, the family respectfully requests non-perishable food items or financial donations be made to Great Plains Food Bank/Daily Bread, 1720 Third Ave. N., Fargo, ND 58102; (701) 232-6219 A private service will be held at 2pm, Friday, January 29 and will be available by live stream on the funeral home website.

The family of Dr. Charles Gust Koski created this Life Tributes page to make it easy to share your memories.

Send flowers to the Koski family.