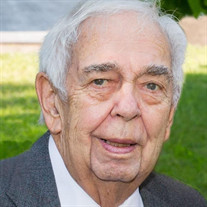 Chuck's Memorial Service can be viewed here: https://vimeo.com/473066606 Video Tribute can be viewed here: https://www.tributeslides.com/tributes/show/L4FSZRXTML9KFRT6 Charles (Chuck) Thomas Olson, of Fargo, North Dakota, passed away on Tuesday, October 13, 2020 at the age of 86, surrounded by the love of his family. He was a loved husband, father, grandfather, and great grandfather, who faithfully read The Night Before Christmas every year and who told the best fish stories, even if he couldn’t always measure correctly. Chuck was a passionate family man, always generous with love and support, who dedicated many years of his life to helping others and in service to his faith. He was a good father who did his best to teach and guide his three children, and a devoted husband who deeply loved and treasured his wife, Mavis. He was an avid fisherman and enjoyed camping, music, golf, and reading. Chuck was the family’s coveted partner for Trivial Pursuit, able to recall any fact to secure the win; to his kids and grandkids, he knew everything. From selling cotton candy at the Shrine Circus, playing Royal Rummy at the dining table, and making the best eggs and bacon while camping, memories of Chuck’s joy and laughter will stay with his family and friends forever. Chuck was born September 22, 1934 to Ingvold and Agnes (Soli) Olson in St. Paul, Minnesota. He was baptized November 11, 1934 at Faith Church and confirmed in 1947 at St. Paul Lutheran Church, both in St. Paul, MN. He attended J.J. Hill Elementary School, graduated in 1952 from St. Paul’s Central High School, and received an AA Degree from the University of Minnesota. On November 25, 1955, Chuck married Mavis L. Conrad at Trinity Lutheran Church in Jasper, MN; they were partners for 65 years and raised three children. Following their marriage, the family lived in Minneapolis where Chuck worked in sales until he transferred to Fargo, ND in 1976. From there, he was Regional Sales Manager for Sexauer Seed Company in West Fargo until it closed in 1992 and then worked part-time at Hornbacher’s in Moorhead until 2011. Chuck was a devoted Christian and a member of Hope Lutheran Church in North Fargo since 1976, where he ushered, greeted, served communion, read liturgy, and was part of a Bible study group. He also served in the Stephen Ministry program, where he counseled others through difficult times. He previously served as a Sunday School teacher, Confirmation leader, and Church Council President at Immanuel Lutheran Church in Eden Prairie, MN. Chuck also gave his time as a Junior Great Books leader, reading to students at Horace Mann Elementary. Since 1985, he was a member of the El Zagal Shrine where he played in the Oriental Band, serving terms as Band Director and President. Chuck became a member of the Daylight Lodge in 2014, served on the Board of Directors for the Scottish Rite Children’s Learning Center, and for many years, he was Santa Claus for the Shrine Children’s Home and Hospitals during the holidays. Chuck is preceded in death by his parents and his brothers, Dale Olson and Robert Olson (Shirlee). He is survived by his wife Mavis Olson, sister-in-law Eileen Olson, children David Olson (Sherry), Karen Moore, and Kim Dunford (Chuck), fourteen grandchildren, and seven great grandchildren. In a celebration of his life, a visitation will be held Monday, October 19, 2020 at 12:30pm at Hope Lutheran Church in North Fargo, with a Funeral Service at 1:30pm. The funeral will also be live streamed through the Hanson-Runsvold Funeral Home website. Please note, masks are required at the visitation and service. If you have a known COVID exposure and have not tested negative, we invite you to join the service through the live stream. Chuck was a proud husband, father, grandfather, and great grandfather, and his family cherishes him. This strong, loving, and good man has left a permanent mark etched on our hearts. He is loved and will be missed dearly by many. Condolences and memories may be shared at www.hansonrunsvold.com Arrangements by Hanson-Runsvold Funeral Home – Fargo, ND

The family of Charles "Chuck" Thomas Olson created this Life Tributes page to make it easy to share your memories.