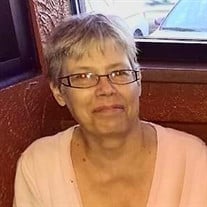 Catherine “Cathy” Bannerman passed away December 10, 2019 at Sanford Broadway Palliative Care, Fargo, ND. Cathy was born on August 22, 1959 to Donald and Doris (Hanson) Bau in Moorhead, MN. She grew up in Fargo, attending Shanley High School and finished high school at Fargo South. She worked at Musicland and Country Kitchen in Fargo before moving to Dickinson, ND with her first husband, Jeffery Novotny. They lived in Dickinson for a year before settling in Fargo, where they raised their children. They divorced in 1998. She worked at Loaf & Jug/Mini Mart for 20 years. She met John Bannerman and they married on October 7, 2000. They moved to Bismarck where she worked for Sam’s Club for 4 years. In 2011, they moved back to Fargo and transferred to Walmart, working there until she retired for health reasons in 2018. Cathy enjoyed playing piano and guitar, traveling and spending time with her children and grandchildren. She is survived by her husband, John Bannerman; two sons, Franklyn Novotny (Rachael) of Mandan, ND and Anthony Novotny (Kate) of West Fargo, ND; daughter, Jennifer Wang (James) of West Fargo, ND; two brothers, David Bau (Julie) of Farmington, MN and John Bau of West Fargo, ND and seven grandchildren, Lillian, Victoria, Zander, Duncan, Jacob, Sophia and Liam. Cathy is preceded in death by her parents and her brother, Chad. Memorials are preferred to the American Cancer Society.

The family of Catherine "Cathy" Ann Bannerman created this Life Tributes page to make it easy to share your memories.

Send flowers to the Bannerman family.