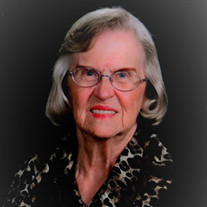 Carolynn "Kay" Johnson's Celebration of Life can be viewed here: https://vimeo.com/691593911 Prayer Service can be viewed here: https://vimeo.com/692451830 Carolynn "Kay" Olin Johnson passed away peacefully in her sleep at her home in Fargo, ND on January 22, 2022. She was 85 years old. Kay was born in Waterville, WA to Leonard W and Minnie (Johnson) Olin. The family moved to a farm near Crystal, ND when Kay was 14. Valedictorian of Hoople High School's Class of 1954, she was awarded a scholarship to Concordia College, Moorhead, MN where she earned an Associates Degree in Elementary Education. While attending Concordia College, Kay met the love of her life, Donald R. Johnson and the couple married on June 15, 1957. Over the next several years Kay and Don lived in Fargo & Grand Forks, ND, Sioux City, IA, Detroit Lakes, MN, and Huron & Mobridge, SD. Along the way they added six children to their family and in 1972 they relocated one last time to make Fargo, North Dakota their permanent home. On August 2, 1990 Kay's beloved Don passed away at age 53. Kay lived a full and active life. Upon her retirement she recalled: "The first 20 years of my life I was a student, the next 20 years I spent as mother of six, a teacher, Girl Scout and Boy Scout leader, etc. then for 20 years I was an insurance agent with my husband and 19 years as manager of the upholstery department at MAC's Hardware." She had planned to work until she was 80 because she didn't want anyone to think she was a "quitter" but she eventually "took 'early' retirement at age 79." Kay loved to travel but even more she loved living in Fargo. She personified the ideals of the book "How Fargo of You"; selflessly giving her time and talents (of which she had many) freely and without hesitation. Throughout her life, Kay was active in her church, community and enjoyed hosting her family and friends in her home. She worked as an election judge whenever called upon, and over the years volunteered with countless organizations such as Meals-on-Wheels, Habitat for Humanity, Churches United for the Homeless Sheltering Churches Program, Bethany Community Living, Girl Scouts and Boy Scouts of America, Church Women United (most recently serving as President) and even helped clean up New Orleans in the aftermath of Hurricane Katrina, just to name a few. She was a strong independent woman, a true matriarch of her family. She led by example, through her faith, with kindness to all and possessed a love for her family that knew no limits. Kay firmly believed in supporting her children in everything they do, so at age 65, when her son Paul completed his tattoo apprenticeship, she got a life-sized Monarch butterfly tattoo on the crook of her arm "so it could fly" when she moved her elbow. Kay was preceded in death by her husband Don, parents Leonard and Minnie Olin, daughter Lynnda Nelson, and brother Dennis Olin. Her legacy lives on through her children, Cynthia (Murray) Wilke, Jayne (Tim Rezac) Johnson Montazemi, Steven (Jack Rydell) Johnson, Paul (Leslie) Johnson, Joel (Nikki) Johnson, daughter-in-law Maren Johnson, son-in-law Rodney Nelson, 10 grandchildren, five great-grandchildren, countless extended family and friends she considered her family, you all know who you are, she "loved everyone like Jesus does." In lieu of flowers, donations can be made to the Olivet Lutheran Church Foundation https://olivet.org/foundation/ or to the charity of your choice.

The family of Carolynn "Kay" Olin Johnson created this Life Tributes page to make it easy to share your memories.

Carolynn &quot;Kay&quot; Johnson&#39;s Celebration of Life can be viewed here:...