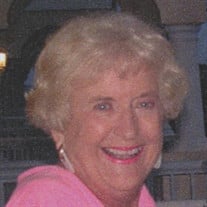 Caroline “Callie” Hector Dady, age 91, passed away peacefully at Touchmark at Harwood Groves on August 8th, 2020. A granddaughter of Fargo pioneer Martin Hector, Callie was born on June 14, 1929, in Fargo to Fred Martin Hector and Margaret Sewall Hector. Callie grew up on 11th Street South in her family’s historic New England-style home, which was designed to emulate her “down east” heritage. She graduated from Fargo Central High School in 1947 and left Fargo to attend the University of Montana at Missoula, where she was a member of the Kappa Kappa Gamma sorority. After graduating college in 1951, Callie returned to Fargo and became engaged to John Dady. Callie and John married on June 23, 1953, in Fargo. They resided in Minneapolis while John pursued his dental degree, and later in Monterey, California, where he served in the US Army Dental Corps at Fort Ord. Callie and John moved back to Fargo to set up John’s dental practice. They eventually settled into their home in south Fargo. There, they raised their three children and shared decades of special memories with friends and family. During her lifetime, Callie tended to her many varied interests, including her beloved children and grandchildren, PEO Chapter Y, summer home on Detroit Lake, service at Gethsemane Episcopal church, and countless dear friends. A lover of life and people, she entertained often, gave freely of her time and talents, and embraced each day with energy, gratitude, and grace. Callie knew how to light up a room with her presence and bring laughter to anyone around her. She spent many of her most recent years with her late-life companion Jim Dixon. Together they enjoyed summers at the lake, winter months in Arizona and Florida, and time with family and mutual friends year-round. Callie will forever be remembered for her warm and generous heart and her beautiful, fun-loving spirit that lives on in eternity. Callie is survived by her three children and their spouses, Camie (Gary) Steiner of Rochester, Minnesota, John (Lisa) Dady of Falls Church, Virginia, and Susie (Peter) Yakowicz of Minnetrista, Minnesota, and six grandchildren, Nick Steiner, Rachel Dady, Heather Dady, Evan Yakowicz, Jack Yakowicz, and Sallie Yakowicz. She was preceded in death by her husband, parents, sisters Mary, Peggy, and Dorothy, and brother Fred. A private family burial is planned at this time and will be held at Riverside Cemetery in Fargo on August 11th. Memorials are preferred to the Fargo-Moorhead Symphony Orchestra, the FM Area Foundation, or Gethsemane Episcopal Cathedral in Callie's name. The family wishes to thank the staff at Touchmark for their compassionate care through the years.

The family of Caroline Hector Dady created this Life Tributes page to make it easy to share your memories.

Send flowers to the Dady family.