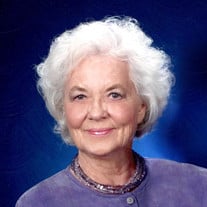 Carol's service will be livestreamed here: https://vimeo.com/612952833 Carol Anderson Rudrud, age 91, long time resident of Fargo, North Dakota, died on September 18, 2021. Carol Janis Anderson Rudrud was born in Mercy Hospital, Devils Lake, North Dakota on October 12, 1929 to Cora (Stoe) and Joe Anderson. It was 12 days before the stock market crash. She remembered that when she was a child, everybody would stuff newspapers in their boots if their soles began to wear out. Her father was a teacher in Penn, North Dakota. When she was two years old, they moved to De Groat Township, where both her mother and father were teachers in the De Groat Consolidated School. They lived in the teacherage across from the school. Carol remembered that in school she called her mom and dad Mrs. Anderson and Mr. Anderson. It was a very happy time in her life, as many neighborhood activities took place in the school and at the nearby Chain Lakes Church. Carol loved dogs and always had one to keep her company. Her mother and father began farming in 1940 when they moved to the Anderson family farm near Penn, North Dakota. One of Carol's great childhood memories was of young people coming from miles around to roller skate at the Penn Hall. Carol continued her education in Penn through her sophomore year and finished her junior and senior years in Devils Lake where she was elected the high school's Homecoming Queen. In the fall of 1947, Carol enrolled at the University of North Dakota (UND), where she majored in Physical Education, was a member of the Delta Delta Delta sorority, a cheerleader, and in 1949, she was crowned the UND Homecoming Queen. That same year, she met her husband-to-be, Ralph "Dutch" Rudrud They married on August 1, 1950. UND always held a special place in Carol's heart and she and Ralph were active in many alumni activities throughout their lives. Carol and Ralph moved to Fargo following their marriage and, in 1952, their first daughter, Judy, was born. Kristin followed in 1955 and after what Carol called "a long pause", Jane was born in 1966. Carol has said that her daughters were the joy of her life. Her daughters remember her as the best mom ever. A true home maker, she devoted her life to her family: cooking great meals, sewing clothes, teaching how to stretch a dollar, making crafts and wild Halloween costumes and creating fun holiday and birthday celebrations. Her kind, engaged, creative spirit gave courage to her children and later her grandchildren, Cora Joe, Jack and Anna, to explore and find their talents and then to go out and give them to the world. Carol and Ralph were the makers of memories. Summers at the little cabin on Lake Melissa and ski trips to Detroit Mountain, then Vail, then Big Sky, were some of the most unforgettable. They loved to travel with family, friends or just the two of them. Carol's daughters have fond memories of piling into the car with pillows and a cooler at 4AM. The family traveled to the East and West Coast, always finding motels with the requisite swimming pool for the girls. Carol and Ralph walked the Great Wall in China, saw Mexico, South America and Europe, and looked up relatives in the 'Old Country' as they traced their roots through Norway. One year they followed the path Ralph had taken in the Seventh Army during his service to the United States in World War II. As her children grew, Carol's dedication spread out to the community of Fargo Moorhead and to the causes that were close to her heart. She served on the board of the Humane Society and became affectionately known as the "dog lady" as she showed animals for adoption on three television stations for 11 years. She volunteered with the St. Luke's Auxiliary, where she washed and styled hair for patients. An exciting time in her life was the building and opening of the Fargo Moorhead Community Theatre in Island Park in 1967. As Ralph served as president, Carol assisted with FMCT cabarets, sewed costumes and did whatever else needed to be done. Carol was a collector and supporter of local artists, filling her home with their works. She let her own artistic talent have free rein when she worked on charity events, creating outstanding decorations for Bazaars and for several Fargo Moorhead Symphony Balls. First Lutheran Church was an important part of Carol's life. She taught Sunday school, Bible school, was a member of the Abigail circle, PEO, and trained in counseling to become a Stephens minister. For years her special dumplings were a favorite at Lenten lunches. She and Ralph were recognized as Bridge Builders of First Lutheran Church for their contributions and years of service. They cherished their friends. Carol had an extraordinary gift of attention. She listened with her heart. When you talked to her, you felt like you were the only person in the world. That attention, along with her smile, her kindness and her love, will live on in everyone who knew her. Carol is survived by her daughters, Judy (Ken) Rudrud Kadash, Kristin Rudrud, Jane (Arnie) Gregory; her grandchildren, Cora Joe Anderson, Jack Gregory and Anna Gregory. She was preceded in death by her husband, Ralph "Dutch" Rudrud and her parents, Joe and Cora Anderson. Memorial contributions in Carol's name are welcome at the First Lutheran Foundation, 619 N. Broadway, Fargo, ND 58103 or the Alzheimer's Association, 2631 12th Ave. S., Fargo, ND 58103. A celebration of her life will be held at 11AM on October 12, 2021 at First Lutheran Church, 619 N Broadway, Fargo, ND 58102. A reception will follow at the church. Burial took place at Riverside Cemetery, Fargo, ND

The family of Carol Anderson Rudrud created this Life Tributes page to make it easy to share your memories.

Send flowers to the Rudrud family.