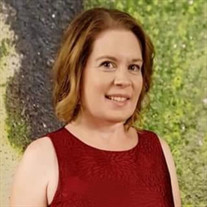 Carla's Prayer Service will be livestreamed here at 7pm, Monday, April 5: https://vimeo.com/533210893 Carla's Funeral Service will be livestreamed here at 3pm, Tuesday, April 6:https://vimeo.com/533211918 Carla Lynn Hubbard, the daughter of August J and Marscida (Wiest) Bachmeier, was born in Rugby, North Dakota, on July 10, 1976. She passed away at the age of 44 years on Saturday, March 27, at her home in Fargo, North Dakota, under the care of Hospice of the Red River Valley. Carla spent a good deal of her childhood growing up in Minot, North Dakota, where she attended Bishop Ryan High School and then came to Fargo where she attended North Dakota State University and graduated in August 2000, taking a job with the Kmart Corporation. It was shortly thereafter she met her future husband, Mark. On July 19, 2002, they were married at St. Mary’s Cathedral in Fargo, North Dakota. They made their home in Fargo. She worked for the Forum Communications Company selling advertising for several years before taking up her most important job, full-time mother to her two wonderful boys. Grant August Hubbard was born on June 23, 2005, followed by Benjamin Paul Hubbard on January 15, 2010. As the boys grew up, she did some part-time work for Courts Plus Fitness Center as well. When the boys would go back to school in the fall, eventually Carla did so also. She took a position as a paraprofessional with the Fargo Public Schools at Kennedy Elementary School in south Fargo. Carla took great care in working with the students she interacted with and treated them as if they were her own, evident in how she worried about them when they were away from school and what was going to happen to them in their future. She truly loved working with kids and taking care of her own, attending sporting activities of her sons, and being a “team mom” through and through. Carla was a devoted Catholic mother and the spiritual guide for her family. She would participate in church groups and volunteer activities through Sts. Anne and Joachim Church and pray the rosary on a regular basis. She had a keen sense of humor and a quiet strength that was evident to those that were around her. She truly was a child of God in every sense. Survivors include her husband Mark, sons Grant and Ben, all of Fargo; brothers Richard (Debbie) of Puyallup, WA and Larry (Lynn) of Colorado Springs, CO; sisters Karen (Duston) Stevens and Shirley (Leroy) Thomas and JoAnn Fries, all of Minot; and Lori (Gerard) Thomas of Becker, MN, as well as many nieces and nephews, other relatives and friends. She was preceded in death by her brother David (4-19-82), mother Marscida (10-30-15), and father August (12-16-17). The family extends a deep-hearted thank you to the devoted health care team at Essentia, particularly the Cancer Center staff and Hospice of the Red River Valley, for their support and loving care of Carla.

The family of Carla Lynn Hubbard created this Life Tributes page to make it easy to share your memories.

Carla&#39;s Prayer Service will be livestreamed here at 7pm, Monday,...

Send flowers to the Hubbard family.