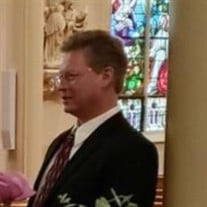 View Carl Riske's Tribute Video Here: https: https://www.tributeslides.com/tributes/show/QSSJ8FLM7L9G2W3H Carl came into this world the same way he left, too early. He was born on the 29th of December in 1972 amidst a raging blizzard (there may be some exaggeration here) and departed far too soon on April 8, 2022. Carl attended Midway school, where he made lifelong friends and worked on the family farm alongside his father, uncle, and grandfather. Growing up in Forest River, Carl was known to all for tearing up the back roads of Forest River, Minto, and Oslo in his mighty four-cylinder Firebird right up until he and his longtime friends "accidentally" watched it go up in flames. In 1991, Carl attended NDSCS in Wahpeton and graduated with an Associates Degree in Drafting, and took his first of many, many jobs at Fargo Glass and Paint. Never a man to shy away from work, Carl worked in the construction industry all his life and had a reputation for building "works of art," according to several building inspectors. Precision was the last company to be graced with his wit and wisdom. He must have really enjoyed it as there was no talk of leaving any time soon. Family bonds were strong with Carl. One of his fondest memories was an opportunity to go on the annual pheasant hunting trip to South Dakota with his dad and uncles. We wonder if this is where he picked up his colorful language, and maybe the seeds of a few of his wild conspiracy theories were planted. Later in life, Carl enjoyed hunting and snowmobiling with his cousins and his godson Donovan. The only time he turned his back on his family was when he became a Kansas City Chiefs fan, but fortunately, it gave his nephew the courage to come out as a Seahawks fan - at least it's not the Packers. One of his weekly rituals was meeting up at the Alibi with Tim, Ron, and the rest of the gang, sipping on Bud Lights and strongly expressing his opinions on everything, whether or not you wanted to hear them. He has reunited with his dad, Ronnie Riske, his grandparents, Francis and Esther Narlock, Leona Riske, Hilary and Phoebe Riske, and Vivian Dunlop. He left behind the broken hearts of his parents, Merrie and Dennis Dunlop; his sister Donna (Kevin) Winters; brothers Derek (Andrea) Dunlop; Tyler (Loan) Dunlop; Ben (Holly) Hixson; nephews Isaac and Jackson Winters, and nieces Isabella and Clara Dunlop. One thing can be assured, his dear old friend Mike Grzadzielewski greeted him with an ice-cold Bud Light. Funeral Service will be held Tuesday, April 12, 2022, at 2:00 PM at Hanson-Runsvold Funeral Home, Fargo North Dakota. Visitation will be held one hour prior to the service.

View Carl Riske's Tribute Video Here: https: https://www.tributeslides.com/tributes/show/QSSJ8FLM7L9G2W3H Carl came into this world the same way he left, too early. He was born on the 29th of December in 1972 amidst a raging blizzard (there... View Obituary & Service Information

The family of Carl John Riske created this Life Tributes page to make it easy to share your memories.

Send flowers to the Riske family.