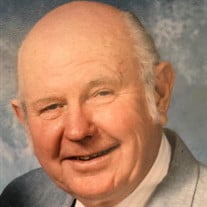 Cal Jokstad, age 94, of Fargo, ND, formerly of Marshall, MN, passed away on April 6, 2020 at Sheyenne Crossings Care Center in West Fargo, ND. Cal, the son of Carl Johann Angle Hanson Jokstad and Hilda Berthina Knudson Jokstad, was born August 30th, 1925 in Slayton, MN. He was raised as a child in both Revere, MN and Westbrook, MN. At the age of 11, he had to take over the responsibilities of the family farm, due to the death of his father. He raised cattle and hogs, and really enjoyed working with horses, especially his horse “Diamond”. After farming for quite some time, he ventured into the insurance business, starting with Time Insurance, then transferring to Western State Life in Fargo, ND. Cal was very proud of his Norwegian heritage and enjoyed traveling to Norway to see the beauty of the country and visit relatives. He was a long-time member of the Son’s of Norway in Fargo. He loved going to the Son’s of Norway to speak Norwegian, listen to music, dance and he never missed a lutefisk dinner. For 25 years straight he attended the Norsk Hostfest to embrace the Scandinavian culture. He was also a longtime member of the Foretravel Motor Club and traveled through the United States with family and friends. Cal is survived by his wife of 51 years, DeVon of Fargo; his son’s, Carlton and Carl Jokstad of Tracy, MN; his stepchildren, Roger Hendricks (Jeanette) of Ham Lake, MN; Rose Halmrast (Gary) of Fargo, and Richard Hendricks (Betty) of Summer, WA. He has seven grandchildren: Mason and Paul Hendricks; Marc, Mandy and Mathew Schroeder; Katie and Samantha Hendricks. He has seven great grandchildren: Drew Hamilton Schroeder, Tiana Schroeder, Allexius Eubanks, Kiley Schroeder, Evan Schroeder, Jencin Hendricks and Evelyn Hendricks. Cal is preceded in death by his parents, Carl and Hilda Jokstad, and his son, Carlyle Jokstad. Cal will be dearly missed by his family, friends and his dogs, Koko and Lady. A special thank you to the care providers of Sheyenne Crossings Care Center in West Fargo for the care that was provided to Cal and his family in a difficult time. A Celebration of Life will be held the in the summer of 2020. A Memorial Service has been held and can be viewed at www.hansonrunsvold.com Memories and condolences may be shared at www.hansonrunsvold.com. Arrangements by Hanson-Runsvold Funeral Home Fargo, ND

The family of Calvin Homer Jokstad created this Life Tributes page to make it easy to share your memories.

Send flowers to the Jokstad family.