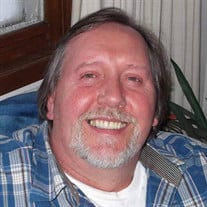 Butch Allen Thompson, 61, Fargo, North Dakota, lost his battle with Covid 19 on October 20, 2020, at Sanford Medical Center, Fargo. Butch was born on June 11, 1959, to Percy and Margie (Kemmer) Thompson in Moorhead, MN, the youngest of nine children. He lived in Fargo until moving to Rochert, MN, in early 1960. He attended Bakkee School, then his family moved back to Fargo, and after high school, he started his rambling and roaming years. Butch was quite an adventurist and an excellent cook! It took him all over! From the remote areas of Alaska (really freaked the folks out on that one!), down to Colorado Springs and Canon City, Colorado, and back to Holiday Inn at Detroit Lakes, MN. He eventually made it back to Fargo, where he worked in Dietary at St. Lukes Hospital. Butch was finally tired of cooking and started driving a truck. He drove for a few different companies before settling at Hank's Specialties. Butch really loved driving, seeing the open road, listening to his blues, and talking to all the people he met along the way. Like our father, he had never met a stranger. After a brief marriage, Butch got back into fishing, frisbee golf, and the music he really loved, the Blues. If you really knew Butch, a five-minute story could last a half hour. There were no quick games when playing with him. Butch was the kind of guy that always had a smile on his face; when he gave you a hug, it was like being wrapped up in love. He was just a big ol teddy bear. And it did not matter at all who you were. Butch was such a great brother to have, years younger to some of us. But it did not matter to us. He was also one heck of an uncle to our kids. They all loved him; he made them all feel like they were the special one. Butch had time for them, and yep, gave them heck sometimes. And it crushed them if he did. He had such a talent for that and being interested in what they were doing and loved by kids that he was chosen to be God Father to 18 Children!! As Butch would say, "Don't pack your bags for this guilt trip". Surviving Butch are three brothers: Barton (Diane) Thompson, Julian Thompson, of Fargo, ND, and Roy (Sheila) Thompson of Buffalo, N.D; 5 Sisters: Patty (Wally) Nyland of Ada, MN, Geraldine (Robert) Fingalson of Ogema, MN, Jacqueline (Butch) Wang of Ottertail, MN, Robin (Keith) Knutson of Elbert, Colorado, Evelyn (Rodney) Knutson of Horace, ND; 25 Nieces and nephews; 65 great nieces & nephews and 19 great-great nieces and nephews. Preceding Butch in death were his parents, his sister-in-law, Corrine Thompson, his niece Cheryl Berg and his nephew Jay Thompson. Graveside service is planned for June 12, 2021, at Springvale Cemetery, Fargo 11 am. Celebration of Life to follow at Oak Grove Park. Please send any memorial to Pat Nyland, 325 W 3rd Ave. S., Ada, MN 56510

The family of Butch Thompson created this Life Tributes page to make it easy to share your memories.