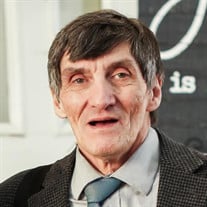 Bruce's Service can be seen here: https://www.youtube.com/watch?v=g0JxNLcptn4 View Bruce's tribute video here. https://www.tributeslides.com/tributes/show/33RSL2XXTB89Q2QW Bruce A. Ray, 67, (Ishpeming – traditional Ojibwe given name- which means “Being up in the Skies and Above”) went to his Heavenly Maker on June 4, 2021, in Fargo, ND, surrounded by his loving family and friends. Bruce was born August 25, 1953 in Charleston, SC. He was baptized and confirmed at the Golden Ridge Lutheran Church. Bruce attended grade school at Madison Elementary School and graduated from Fargo North High School in 1971. He served his country in the Army National Guard. Bruce married Debra Hogy July 7, 1973. He liked working with his hands and with machinery. Bruce worked at Versatile Manufacturing and later for Fargo Forum Communications and stayed with the company until his retirement. He worked his way up to the positions of Installation and Maintenance of Printing Production Services, Field Service Technician and Project Coordinator and was a Forgot Precision Machinist. He was very proud of his work and made many lasting friends throughout his years at The Forum. He married Linda Hanson, January 11, 2019. Bruce loved outdoor sporting activities and through the years participated in marathons, biking, canoeing, camping, hiking, Nordic and downhill skiing, rollerblading, and Triathlon events. In his retirement he became an accomplished whittler and enjoyed playing the guitar. He was a proud member of AA for 39 years. He was editor of the Silver Dollar paper for 14 years and mentor to many new and old AA members. He had a special place in his heart for the 4 dogs he and Linda cared for over the years: Bon Jovi, Heidi, Beau and Sonya. He is survived by his wife Linda; brothers, Alan of Fargo, and Terry (Penny Peltier) of Mille Lacs, MN; sisters, Mary (Terry Curfman) of Andover, MN and Sandy (Dan Reynolds) of Dilworth, and many nieces, nephews and friends. He is preceded in death by his parents, Robert and Gladys Ray, and brother, Charles (Chuck) Ray. A luncheon will follow the memorial service; casual attire. The service will be livestreamed. In lieu of flowers, donations may be made to the Lighthouse Church, Silver Dollar Paper or Gladys Ray Shelter.

The family of Bruce Anthony Ray created this Life Tributes page to make it easy to share your memories.

Send flowers to the Ray family.