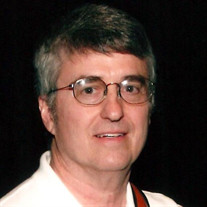 Bradley Gibb, 69, Vergas, Minn., died Thursday, July 11, in an accident at Hawley Airport. He was an adventurous spirit who lived his life with great passion. He left this world and flew to heaven doing what he loved, flying his gyrocopter. Brad was born November 7, 1949, in Fargo, N.D., to Donald and Mary (Vickers) Gibb. He attended Washington Elementary, Agassiz Junior High, and was a graduate of the last class of Fargo Central High, where he was a member of the swim team. In high school he met his future wife Kaylynn (Heth). He attended the University of North Dakota and was a member of the ATO fraternity. He left school to work as a plumber for Robert Gibb and Sons Mechanical Contractors, the third generation in a family business started by his grandfather, Robert. In 1971, Brad and Kaylynn welcomed their only son, Jason. Brad resumed his education at Moorhead State University, initially majoring in music. He earned a Bachelor of Arts degree in accounting. After a year working for a bank in New Mexico, he rejoined the family business as a plumbing and heating estimator. During his time at Gibb and Sons, the company was awarded many large mechanical contracts in the region such as West Acres, the Radisson, Fargo Water Treatment Plant, and the highlight of his 27-year career, the Fargodome. His love of music began in 1959 when he took organ lessons with his father, played saxophone in the school band, and briefly played in a garage band with friends. After retiring, Brad returned to music in 2005, joining the FM Golden Notes New Horizons Band with Kaylynn. In 2010 they joined the East Valley Pops Orchestra in Mesa, Ariz. They also enjoyed entertaining at retirement homes, fundraisers, and church. Brad loved golf, playing year-round after retirement at the Detroit Lakes (Minn.) Executive course and Fountain of the Sun in Mesa, Ariz. He also enjoyed spending time outdoors hunting, skiing, boating, and sailing, including many hours on the lakes of Minnesota and Lake of the Woods. In the 1980s, Brad became an instrument-rated pilot, owning and operating a Piper airplane. He later built a fixed-wing ultralight aircraft. After retirement, he realized a life-long dream and earned his rating as a gyroplane pilot. Brad is preceded in death by his parents and his brother Scott. He is survived by his wife, Kaylynn; son, Jason (Pam); grandchildren, Claire and Alexander, of Moorhead, Minn.; brother, Steve (Lisa) of Rollag, Minn.; sister, Marsha of Rio Rancho, N.M., and a large extended family of nieces, nephews, cousins, and in-laws. Brad will be greatly missed. A celebration of his life will be held July 19 at Detroit Lakes United Methodist Church at 2 p.m. Visitation will be held one hour prior to the service. Burial will be at Riverside Cemetery in Fargo at a later date. In lieu of flowers, memorials may be sent to a charity of your choice.

Bradley Gibb, 69, Vergas, Minn., died Thursday, July 11, in an accident at Hawley Airport. He was an adventurous spirit who lived his life with great passion. He left this world and flew to heaven doing what he loved, flying his gyrocopter. Brad... View Obituary & Service Information

The family of Bradley James Gibb created this Life Tributes page to make it easy to share your memories.

Send flowers to the Gibb family.